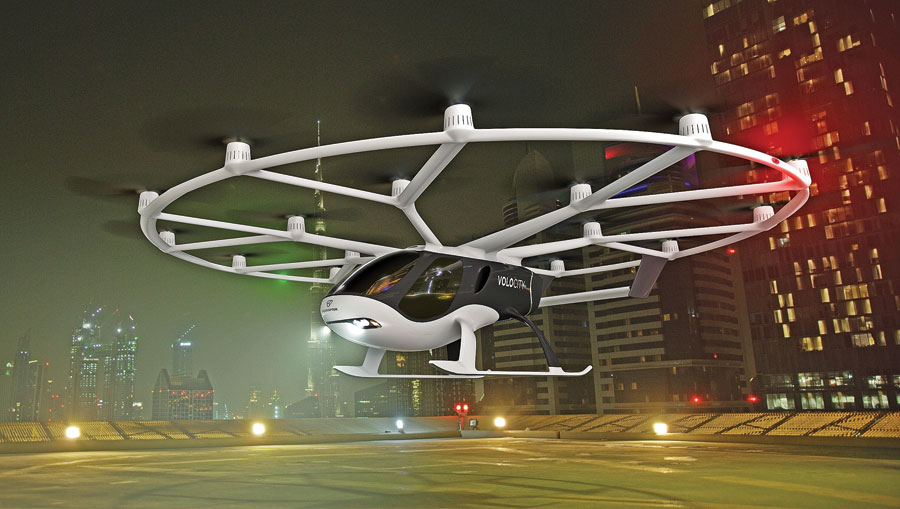 This is an example of the sort of vehicle Volocopter hopes to develop, and launch commercially. (Photo: China Daily)

Chinese automaker Geely has taken a stake in the German air taxi company Volocopter, leading a round of investment worth 50 million euros ($55.2 million) that will help the startup finance its commercialization within the next three years.

Volocopter, an urban air mobility pioneer, announced it had concluded its latest funding round with the participation of Zhejiang Geely Holding Group, the parent company of Volvo Cars and the London Electric Vehicle Company, which was formerly known as the London Taxi Company.

Geely and Volocopter have also agreed to enter a joint venture with plans to bring a flying car to China.

The first closing of the Series C funding round will increase the total capital that Volocopter has raised to 85 million euros ($94 million). The company remains in discussions with additional investors for a second closing which will happen around year-end.

Founded in 2011, Volocopter builds electrically-powered air taxis based on drone technology that are designed to carry two people.

The aim of the technology is to save people time and to help megacities transform their transportation systems toward a more sustainable future by adding a new mobility option for citizens.

Florian Reuter, chief executive of Volocopter, said: "Urban mobility needs to evolve in the next few years to meet rising demand. With our Volocopter air taxis, we are adding a whole new level of mobility in the skies and this funding round is allowing us to take great strides towards bringing urban air mobility to life whilst being respectful of our shareholders' money."

Geely Holding, a privately-owned automotive group from China that has a portfolio of global brands including Geely Auto, Volvo Cars, and Lotus, also acquired a 9.69 percent stake in Mercedes-Benz-manufacturer Daimler in 2018.

Li Shufu, chairman of Geely Holding, said: "Geely is transitioning from being an automotive manufacturer to a mobility technology group, investing in and developing a wide range of next-generation technologies.

"Our latest cooperation with Daimler, building on our partnership in smart and premium ride-hailing services, as well as our joint venture with Volocopter underlines our confidence in Volocopter air taxis as the next ambitious step in our wider expansion in both electrification and new mobility services."

Doris Fischer, chair of China business and economics at the University of Wuerzburg in Germany, said the partnership is a win-win scenario.

"Working on such innovative ideas together for sure will provide thrilling experiences and advantages for both sides," she said. "The advantage for Volocopter in this case is a capital injection, and it may be also easier access to the Chinese market in the future. The advantage to Geely most likely lies in the cooperation with an innovative firm."

Fischer pointed out that the fact that a Chinese company is investing substantial venture capital into a German enterprise "constitutes a watershed in the way Chinese firms engage in Europe".

"It definitely still seems to be unusual, but at the same time it is not completely unexpected," she said.