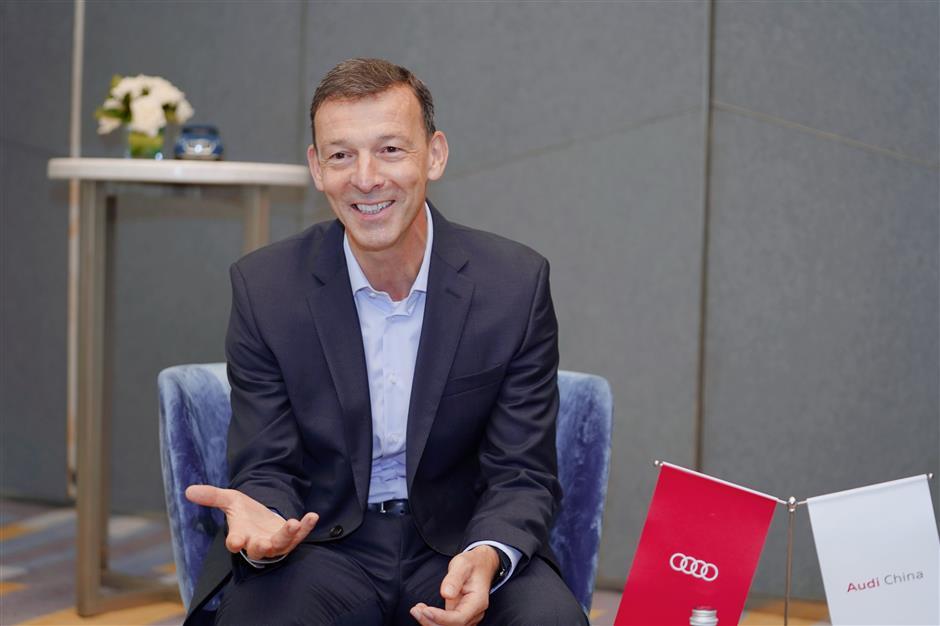 Werner Eichhorn, president of Audi China, said the company’s performance in the first eight months of this year was above the previous year and might  have a chance to have a record 2020 overall. (Photo: Shine.com)

German automaker Audi is accelerating its development to meet industry trends  in China such as electric vehicles and connectivity with the debut of seven new vehicles at the 2020 Beijing auto show.

Eichhorn said that he is optimistic about Audi’s sales performance in the last quarter of this year, and Audi China might have a chance to have a record year overall. Till the end of August, Audi China’s performance was above the previous year, as the automaker is growing its sales and gaining market share.

China is Audi’s largest single market in the world and the automaker is going to further enhance its product and service capabilities to better meet the demands of Chinese consumers. At the beginning of this year, Audi officially announced that it plans to launch more than 20 new products in the Chinese market this year.

Eichhorn has been the president of Audi China since April 1, 2020. He has been with the Volkswagen Group since 1982 and has held various senior management positions at brands in the group including Audi, Volkswagen and Skoda.

Eichhorn worked from 2005 to 2008 as the head of FAW-Volkswagen’s Audi sales division. The division sells Audi vehicles imported and locally produced by FAW-Volkswagen in China. As the first head of the division, Eichhorn has led it to high levels of success.

Now Eichhorn is back to take charge of Audi China’s business, as the German auto giant is optimistic about its future business here and aims to further strengthen its overall competitiveness.

The automobile industry is transforming with emerging trends such as the rise of electrification, autonomous driving and connectivity. Audi China is also accelerating its pace in these emerging sectors.

Eichhorn said that although the new-energy vehicle and electric vehicle market is rather small at present this will change in the future, especially in the premium sector. The automaker expects to drive and shape the future of mobility in this sector.

Audi has e-tron, a product brand which brings together competencies in terms of future technologies, including electric drive train, autonomous driving, as well as connectivity.

The automaker said it will have more than 30 electrified cars in the years to come, which will be a step-by-step process toward zero emission cars in the Chinese market. Audi already localized e-tron in Changchun with its partner FAW-Volkswagen.

Step by step, the automaker will have e-tron, e-tron Sportback, e-tron GT, then the first e-tron Q4 on the market, and then Audi will make the next big step into the PPE platform which is a joint platform to develop an electric vehicle with Porsche.

Charging is important for electric vehicles and Audi has a joint venture which provides charging services to car owners. Audi said that it hopes to provide consumers with good looking, high-quality and fun-to-drive vehicles, as well as convenience in connectivity and charging.

Audi China was founded in 2009 in Beijing as a wholly-owned subsidiary of AUDI AG. The company has more than 700 employees and coordinates the business partnership between AUDI AG, the FAW Group and the joint venture FAW-Volkswagen.

In 2019, Audi increased sales in China by 4.1 percent to 690,083 units. This is a new record for the premium brand with the longest history in the country.

In the first eight months of this year, Audi achieved sales of 402,447 units, according to the sales data released by the China Passenger Car Association.

“For the last quarter of 2020, of course we want to move on, business wise we are pretty good and on track,” Eichhorn said. “Audi China is optimistic also for next year that especially for the car industry we see a growth trend.”