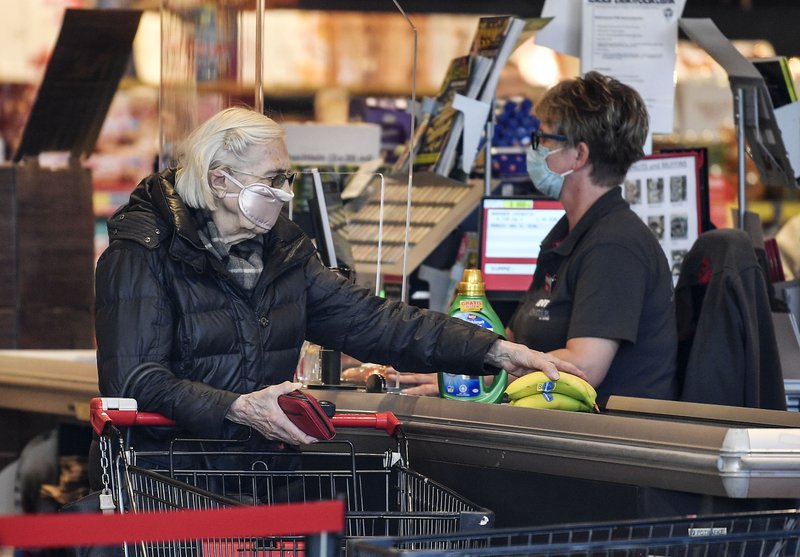 An elderly woman with a face mask checks out at a supermarket in Gelsenkirchen, Friday, April 24, 2020. From next week face masks are mandatory in Germany when shopping and at public transport due to the coronavirus outbreak. (Photo: AP)

A closely watched indicator of German business executives’ outlooks plunged to its lowest ever level in April as economists struggled to predict just how deep the coronavirus downturn would be in Europe’s largest economy.

The Munich-based Ifo institutes business climate index nosedived to 74.3 points from 85.9 in March. Ifo head Clemens Fuest on Friday described the mood among companies as “catastrophic” and said “the corona crisis is hitting the German economy with full force.”

Economists said it was difficult to chart how big the fall in economic output would be since the situation is unprecedented, with many areas of activity not in a downturn, but simply coming to a full stop due to widespread restrictions on movement, activity and association aimed at stopping the spread of the virus.

Rees said the situation was not like other economic downturns based on the usual swings of the business cycle, with the result that previous prediction models were less valid and probably understated the true depth of the downturn. “At least some business activities, especially in the services sector, were basically zero. This is not just a ‘normal’ deterioration in a typical cyclical downswing but a crash to historically low and unprecedented levels,” he wrote in an email.

Kenningham wrote in a research note that “the April reading will probably mark the low point given that the government has begun to loosen some of the restrictions this week, albeit only tentatively, with small shops and car showrooms re-opening. But the recovery will be from a very low base.”