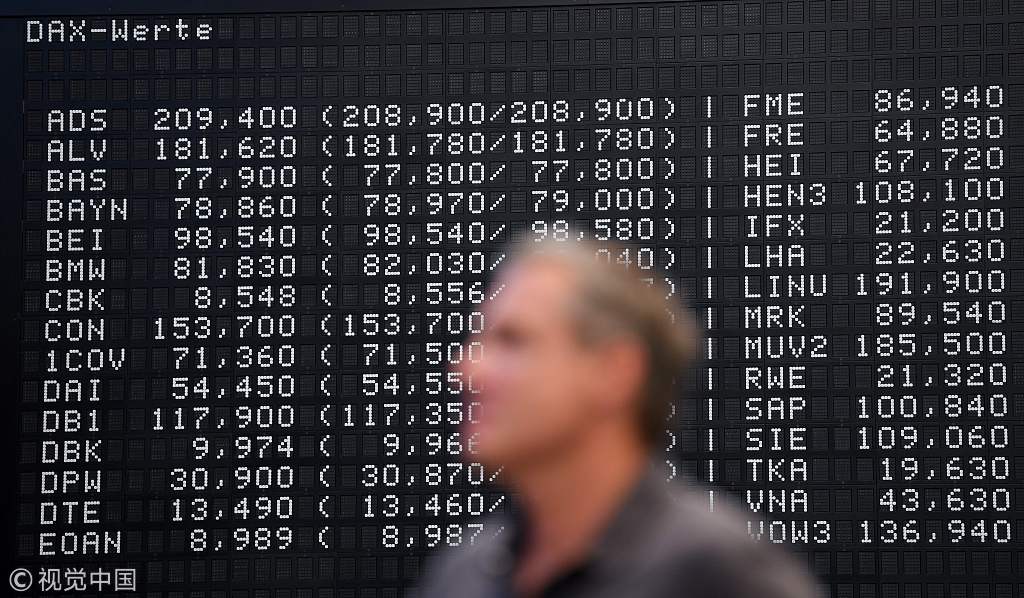 A stock broker walks past the display board of the DAX in Frankfurt am Main, western Germany on September 5, 2018. Wirecard, a fintech company specializing in electronic payments, is expected to replace the second German bank Commerzbank, in the Dax index on the Frankfurt Stock Exchange, reflecting the digital surge that upsetting the traditional banks. (Photo: VCG)

Wirecard, a Bavarian start-up specialised in online payments, has nudged German giant Commerzbank out of the blue-chip DAX index, in the latest sign of plucky fintechs outshining traditional lenders.

Frankfurt stock exchange operator Deutsche Boerse made the announcement late Wednesday as part of its regular review of the composition of the DAX 30 index, based on the market capitalisation and trading volumes of Germany's top listed firms.

The change will take effect on September 24.

Commerzbank CEO Martin Zielke said it "of course, it is not welcome" that Germany's second-largest lender and a founding member of the prestigious DAX club three decades ago has to move to the mid-size MDAX index.

"But nothing changes for our customers and our business."

The ailing bank, which had to be rescued by the German state during the financial crisis, has seen its share price plunge by a third since January to give it a market cap of just over 10 billion euros ($11.5 billion) -- the lowest of all DAX 30 players.

Investor darling Wirecard, currently listed on the TecDAX index, had been widely expected to take Commerzbank's spot in the reshuffle.

The so-called "financial technology" (fintech) company that makes software for cashless and contactless payments has seen its share price soar by 110 percent this year.

It has a market cap of over 23 billion euros, surpassing even flagship lender Deutsche Bank which is valued at some 20.5 billion euros -- and was itself axed from the eurozone's benchmark Eurostoxx 50 index on Monday.

Wirecard is now the country's third-largest financial group on the German stock market behind insurance behemoths Allianz and Munich Re.

Founded in a Munich suburb in 1999 at the height of the dot come bubble, Wirecard started out processing card payments for gambling and pornography websites.

Its rise has been fuelled by the boom in e-commerce and surging demand for online transactions as well as payments made just by holding a credit card or smartphone over a reader, technologies that have shaken up the financial sector and left old-school banks struggling to keep up.

In a sign of its global ambitions, Wirecard has clinched partnerships with Chinese mobile payment companies Alipay and WeChat Pay, hoping to cash in on the burgeoning market of using apps to pay for goods in real-world shops.

Wirecard CEO Markus Braun said only around two percent of transactions around the world today are fully digital, with cash still accounting for the bulk of purchases.

German Finance Minister Olaf Scholz last week said the decline of Deutsche and Commerzbank was "a problem" for Germany's export-reliant companies, as local lenders can't match the scale or reach of foreign rivals.

How the German banking sector develops from here will depend partly on the ability "of traditional actors to adapt to new technologies", according to Claudia Buch, vice president of Germany's Bundesbank central bank.

Commerzbank said it remained committed to its turnaround plan, which includes a major push to win new retail banking clients and an ambitious digitalisation drive.

"At the moment it is obviously the case that the market values fintechs more highly than traditional banks," Zielke said in a statement.

"This development shows that our strategy is the right one and spurs us on to push ahead with the transformation into a digital enterprise."

But analysts say the future could well belong to fintechs.

"Even if Commerzbank and Deutsche Bank offered the same products as fintechs, the big banks would always have to deal with frighteningly high costs" like personnel expenses, said Rainer Haselmann, a finance professor at Frankfurt's Goethe University.

"Nimble fintechs will have less trouble growing than banking dinosaurs."