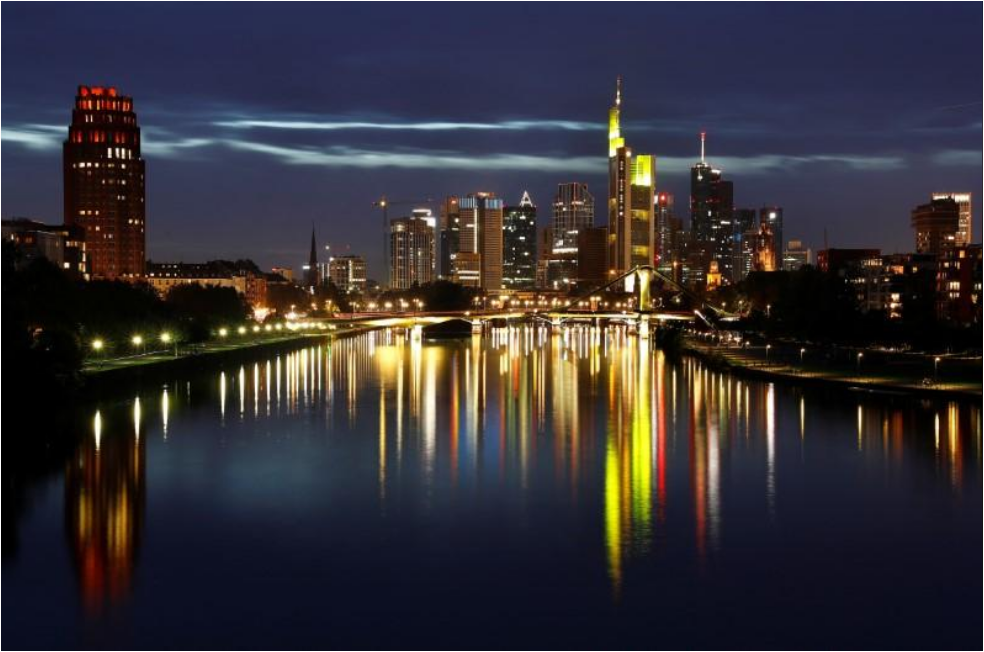 The skyline, with its characteristic banking towers, is reflected in river Main in Frankfurt, Germany, October 1, 2017. （Photo: Reuters）

German inflation soared more than expected in May, propelled by higher energy costs to its highest level in more than a year and surpassing the European Central Bank’s target of just under 2 percent for the euro zone as a whole.

German consumer prices, harmonized to make them comparable with inflation data from other European Union countries, rose by 2.2 percent year-on-year after an increase of 1.4 percent the month before, the Federal Statistics Office said.

This was the fastest pace since February 2017 and beat a Reuters consensus forecast for a rise of 1.8 percent.

On the month, EU-harmonized prices were up 0.6 percent, the preliminary numbers showed. That compared with the Reuters consensus forecast for an increase of 0.3 percent.

In another sign of accelerating inflation in the euro zone, Spanish consumer prices rose in May at their fastest pace since April 2017, also topping the ECB’s target level as energy costs went up.

The stronger-than-expected inflation figures are likely to play into the hands of policy hawks, including Bundesbank head Jens Weidmann, who want the ECB to end its asset purchases this year and see room for a rate hike towards the middle of 2019.

But investors have dropped long-standing bets that the ECB would raise rates in June 2019 amid signs of weaker economic growth in the euro zone and market turmoil associated with a political crisis in Italy.

In Portugal, annual consumer price inflation rose to 1.0 percent in May, up from 0.4 percent in the previous month, data from the National Statistics Institute showed on Wednesday.

The euro zone will publish preliminary May inflation data on Thursday, with the annual rate expected to rise to 1.6 percent from 1.2 percent in April, according to a Reuters poll.

The German statistics office did not provide a preliminary reading for core inflation. But regional data from the states suggested that higher prices for energy, food and transport were the main drivers of the surge in May.

She added, however, that she still expected the ECB to end its bond purchases this year, to avoid the risk of second-round effects on inflation.