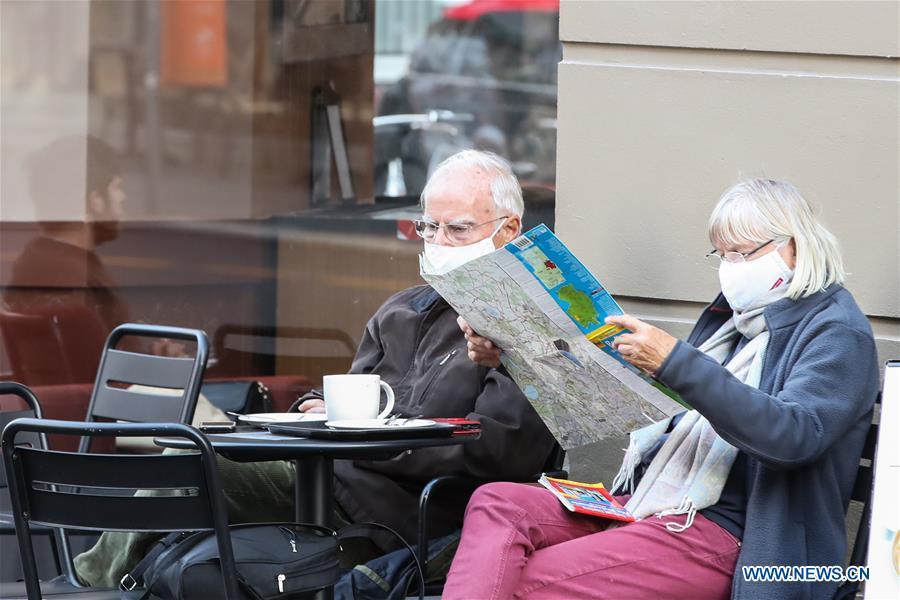 Two tourists wearing face masks rest by a table outside a cafe during the COVID-19 epidemic in Berlin, capital of Germany, Oct. 24, 2020. (Photo: Xinhua)

The biggest winner among Germany's 30 largest listed companies at the start of trading was plastics specialist Covestro, increasing by 2.75 percent, followed by aircraft engine manufacturer MTU Aero Engines with 2.38 percent and Deutsche Bank with 2.28 percent.

On Monday, British investment bank Barclays lowered its price target for Covestro from 56 to 53 euros (from 66.28 to 62.73 U.S. dollars) but left the rating at "Overweight." Shares of the German plastic specialist were trading at around 45 euros (53.26 dollars) at the start of trading.

Shares of Henkel fell by 0.2 percent. The German consumer goods company was the biggest loser at the start of trading Monday.

The yield on German ten-year bonds went down 0.013 percentage points to minus 0.561 percent, and the euro was trading almost unchanged at 1.1842 dollars, increasing by 0.03 percent Monday morning.