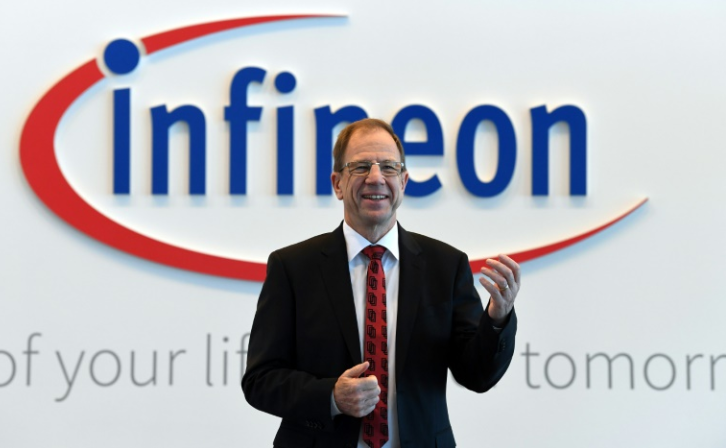 Infineon CEO Reinhard Ploss said the transantion with Cypress would "open up additional growth potential in the automotive, industrial and Internet of Things sectors." (Photo: AFP)

With an offer to take over US competitor Cypress for around nine billion euros ($10.1 billion), German chipmaker Infineon aimed Monday to grab the number-eight spot in the industry and expand into the "Internet of Things".

Infineon, a wallflower in a bout of consolidation in the semiconductor industry in recent years, said in a statement it agreed to pay $23.85 per share in cash for Cypress.

"With this transaction, we will be able to offer our customers the most comprehensive portfolio for linking the real with the digital world," Infineon chief executive Reinhard Ploss said.

"This will open up additional growth potential in the automotive, industrial and Internet of Things sectors," he added.

The companies currently have complementary focuses.

Infineon, which spun off from the Siemens conglomerate in 1999, focuses on power semiconductors, sensors and security solutions.

California-based Cypress, which bought the Internet of Things division of Qualcomm in 2016, focuses on microcontrollers as well as software and connectivity components and flash memory.

"Combining these technology assets will enable comprehensive advanced solutions for high-growth applications such as electric drives, battery-powered devices and power supplies," they said in the joint statement.

Infineon said the deal is expected to have a positive effect on earnings from the first year, with revenue growth of at least 9 percent, a double-digit increase in margins and a drop in the investment-to-sales ratio.

It targets 180 million euros in annual savings by 2022, and put the long-term potential of synergies at more than 1.5 billion euros per year.

The German firm said that while a consortium of banks will underwrite the funding of the acquisition of Cyprus, it intends to ultimately finance around 30 percent of the transaction with a capital increase, use some cash reserves and finance the rest with debt.

Prospects of an investor dilution prompted stock in the Munich-based group to fall 6.5 percent in morning trading to 15.04 euros, making it the worst performer on the DAX index of German blue-chip shares.

The $23.85 offer price is nearly a 50-percent premium to the 30-day volume-weighted average price during the period from 15 April to 28 May, before market rumours of a deal began.

Infineon said the acquisition, which it expects could close by the end of this year following regulatory approvals as well as by Cypress shareholders, will make it the world's number eight chip manufacturer.

The company, which makes about a quarter of its sales in China, has twice revised its forecasts down in the last year due to the global slowdown, and lags behind main US rivals Intel, Micron, Qualcomm, Broadcom and Samsung.

Its Californian target, which has been based in San Jose since 1982, acquired in 2016 the 'Internet of Things' division of Qualcomm, which has huge potential for manufacturers.