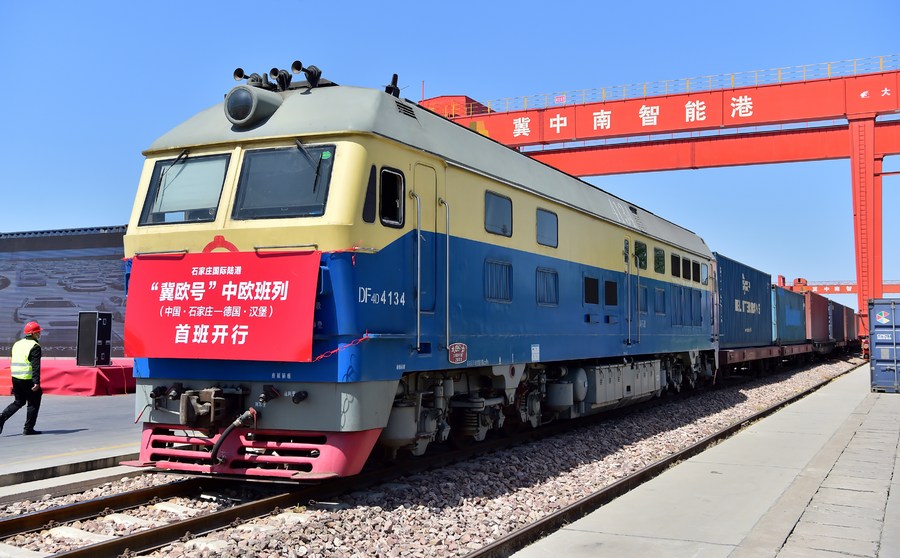 A freight train bound for Hamburg, Germany is ready to depart at the Shijiazhuang international land port in north China's Hebei Province, on April 17, 2021. (Photo: Xinhua)

China remained Germany's biggest import country in March as goods imported from China totaled 11.7 billion euros, increasing by 46.6 percent from the same month of 2020, according to Destatis.

Trade with the United States also picked up after declining in February. Imports from the U.S. increased slightly to 6.7 billion euros in March, while German exports to the U.S. rose by 8.8 percent to 11.1 billion euros, according to Destatis.

German companies regaining their ground in global trade despite the coronavirus pandemic was "proof of their strong competitiveness and flexibility in dealing with challenges," said Anton Boerner, president of the Federation of German Wholesale, Foreign Trade and Services (BGA), in a statement on Friday.

Germany's total exports in March rose 16.1 percent compared to the same month last year to reach 126.5 billion euros. At the same time, the country's imports increased by 15.5 percent to 105.9 billion euros, according to Destatis.

"Despite the enormous catch-up in German foreign trade, however, we also see serious risks that could impair this development," warned Boerner. The pandemic had led to major distortions in international sea freight, resulting in a shortage of containers and high freight prices. (1 euro=1.21 U.S. dollars)