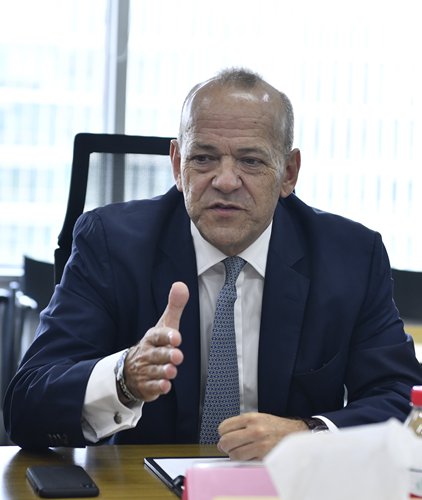 Identifying itself as a potentially good partner of Chinese financial, insurance and digital companies, Gibraltar is now reaching out to China for business partnerships.Gibraltar's Minister of Commerce Albert Isola  recently visited China to explore opportunities in insurance and the digital economy. During his trip to Beijing in June, Isola reached out to China's banking insurance regulator for cooperation in insurance. He also signed a Memorandum of Understanding (MOU) with Huobi, a leading global digital asset financial services provider, to promote the development of Gibraltar's digital economy. Isola told the Global Times that they work very closely with Willis Towers Watson, one of the largest international insurance companies. Gibraltar, he added, has a vibrant services sector which contributes to businesses. "We have already entered into an MOU with Beijing Construction [Engineering Group]. They're looking at doing some projects with us in Gibraltar in terms of infrastructure projects, and the discussions are ongoing," he told the Global Times. Gibraltar's digital economy, Isola said, took off on January 1, 2018, after parliament passed legislation in October 2017, which enabled digital businesses to be regulated and licensed in Gibraltar. After that, a number of well-known international firms entered this territory. Gibraltar now has around 16 firms licensed or about to be licensed. Huobi is one among the licensed firms. "These companies agree to work in a way which meets the highest standards in terms of [anti]-money laundering compliance and all the types of requirements that firms licensed in financial services would normally need to have," he explained. Compared with other Belt and Road countries, the minister said, Gibraltar has its advantages. "I think Gibraltar has a first-class reputation. Also, [we have] agility... When you have a small jurisdiction, you can work much quicker," he said. "So we were the first country in the world to have a legal framework for the digital economy. Many others have followed after that."According to the minister, they didn't offer any preferential conditions to foreign companies. But their tax rates are very competitive, he added."Every country has a different rate of tax. So if you go to the UK, it's currently 17 percent, we are 10 percent. Our rate of tax is fair, but competitive."Another major benefit that Gibraltar can offer firms from outside of the region is that they have an agreement with the UK in which they can provide passport services. Passport services are something very "common" within the European Union because the UK and Gibraltar are part of the bloc, he said.According to an article published in the Independent, the EU passport could enable financial firms in one country like the UK to sell their services right across the EU.Gibraltar, according to the minister, has a guarantee that they can continue to offer passport services into the UK even after the UK exits the EU as part of Brexit. "When we leave the EU, there's gonna be a bilateral arrangement. It's already been signed. So it's in force between the UK and Gibraltar," he said. "So a Chinese company that wishes to come to Gibraltar would have certain rights under certain areas of industry to automatically gain access to the UK market." Isola said as a small territory they want to pick partners who are leaders in their fields. "We don't want to have hundreds of Chinese businesses. We want to have a few, but the best ones. We want the market leaders. Those are the ones that we can help by enhancing their reputation, and they help us by enhancing our reputation," he said.He added that they also need to ensure these partners are happy to comply with anti-money laundering laws, the transparency and the exchange of information regulations. Isola disclosed they are also looking for potential cooperation with Chinese companies in a third-party market. "One of the things in insurance field that we are looking at doing is enabling Chinese companies to set up insurance vehicles outside China for the international work they are doing around the world," he said. For example, if you have a large company involved in infrastructure in different parts of the world, it would set up an insurance company in Gibraltar to service all their needs outside China, he said."That is something that we are looking at in the insurance space and we're working with Willis Towers Watson and China Re to see how we can help Chinese companies [that are] investing all over the world, particularly in infrastructure, better management and profit from their risk," said Isola.