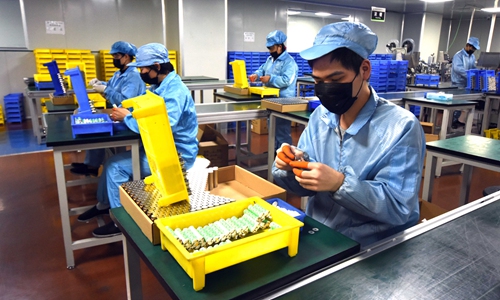 Electric vehicles (EVs) have become an unstoppable trend in the global auto industry, and automakers worldwide have turned their eyes to core technologies and supply chains surrounding batteries. The race for EV supremacy will only get fiercer.

European auto giants like Daimler and Volkswagen have been taking the initiative to seek partnerships with Chinese battery suppliers to guarantee sourcing and expand their EV layouts in China.

Separately, German automaker Daimler was reportedly planning to invest in Ganzhou-based Farasis Energy's IPO, aiming to ensure a stable supply of batteries from the Chinese firm as it ramps up EV production, according to Reuters, citing people familiar with the matter.

In the rising EV sector, classic auto firms from Europe are also ramping up efforts to revive their glory from the era dominated by internal combustion engines.

The German automaker, which plans to make 22 million EVs by 2028 and half of those in China, is racing to leapfrog peers to take the lead in EV transformation.

Governments of European countries have also strongly supported local battery and EV industries for fear of lagging behind and to catch up with Asian competitors that have dominated battery making, Tian Weidong, a senior analyst at Guangzhou-based auto industry consultancy Ways Information Technology, told the Global Times.

"A few years ago, German automakers were not as determined and eager as they are now to bet on EVs and accelerate their pace of transformation," said Tian.

In 2019, the European Commission, EU's executive arm, approved 3.2 billion euros of state aid from seven EU countries for research and innovation in battery technology across the value chain. That covered the mining and processing of raw materials, the production of advanced chemical materials, the design of battery cells and modules, their integration into smart systems, and the recycling and repurposing of used batteries.

A report released by Brussels-based non-profit Transport and Environment on May 25 showed that Europe has outpaced China in attracting investment for EVs and battery development by securing a record 60 billion euros of investment last year. That number was 17.1 billion euros in China.

"In battery making, Europe does not possess the advantage as the Asian battery industry has both raw materials and technology breakthroughs, that's why it is rushing to invest further to boost the sector," Yu Qingjiao, secretary general of the Zhongguancun New Battery Technology Innovation Alliance, told the Global Times.

By comparison, the US' EV sector has been largely dominated and promoted by one firm: Tesla Inc, which has invested in a string of "Gigafactories" to supply its luxury electric cars. The US' investment in the sector is believed to lag behind that of the EU and China, analysts said, as the US energy authority has shifted its focus to grid transformation and energy storage, thus greatly reducing the budget for battery research.

Ready to stand out

As a new battleground for high-end manufacturing, global competition for core battery technologies and market share will only get fiercer, industry analysts said.

China has shaped advantageous conditions for the sourcing of raw materials as well as technology research and development, said Yu, adding that suppliers of six core materials for battery making are based in the country.

"In terms of technology and management, Japan and South Korea still have the upper hand due to their years of rich experience, but they do not have advantages in raw materials," Yu noted.

The top two EV battery makers in China, CATL and BYD Co, occupy a combined total of up to 80 percent of the domestic market and have both shown innovations and the ambition to expand globally.

CATL has signed supply deals with Tesla and Volkswagen, and expects to increase its battery manufacturing capacity in the next two years, its Chairman Zeng Yuqun said in a recent interview with Reuters.

Tesla has reportedly chosen the leading Chinese battery maker as a partner to co-develop the next-generation battery, which will have lower costs and a longer life.

Shenzhen-based BYD, which has recently launched its cutting-edge blade battery, will supply EV batteries to US automaker Ford Motor Co. It will be the first time the company has supplied its battery to a global automaker.

China's EV industry subsidy policy has been extended due to industrial impact caused by the outbreak of COVID-19, which will benefit battery makers, according to Tian.

The State Council, China's cabinet, announced the two-year extension in March, providing price subsidies for new-energy vehicle (NEV) makers and waiving car-purchase taxes for consumers until the end of 2022.

However, experts warn that both battery and EV makers should remain on the alert as they cannot live on subsides indefinitely and need to enhance their market competitiveness as soon as possible, or the "catfish effect" brought on by foreign EV players like Tesla is likely to become the "crocodile effect."

"Objectively speaking, in the middle stream of the EV sector, which includes battery making, we have stood out. But in terms of ultimate product - an EV that could win the market - domestic automakers still have some distance to go," Yu noted.

As the world's largest car market, China has encountered downward pressure in vehicle sales in the past two years. In 2019, sales of NEVs decreased 4 percent year-on-year to 1.2 million units.