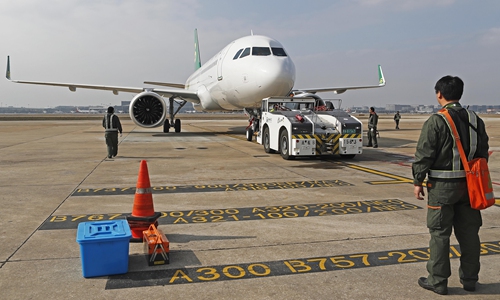 Global aviation remains in a dark tunnel with no end in sight as the coronavirus pandemic spreads to more countries around the world, and insiders warn airlines could run out of money before there's a recovery.

Despite the grim global outlook, China's domestic market is now in recovery and is offering confidence to the global aviation industry.

The International Air Transport Association (IATA) on Tuesday updated its analysis of the COVID-19 impact on revenue in the global air transport industry, and now estimates passenger revenues could plummet $252 billion, or 44 percent below 2019's figure.

The prediction was made in a scenario in which severe travel restrictions persist for up to three months, followed by a gradual economic recovery later this year.

IATA earlier predicted up to $113 billion revenue losses, but that was before countries around the world introduced sweeping travel restrictions that largely eliminated international air travel. "The airline industry faces its gravest crisis. Within a matter of a few weeks, our previous worst-case scenario is looking better than our latest estimates. But without immediate government relief measures, there will not be an industry left standing," IATA CEO Alexandre de Juniac warned.

Within a few weeks, the industry has reached the edge of a cliff and the bad news has not stopped flooding in.

Flight cancellations hit almost 20,000 globally by Monday, with more than 30 airlines around the world grounding all international flights. GE Aviation has said it will lay off 10 percent of its US workforce.

Etihad Airways on Monday said it has joined Emirates in suspending all flights in response to government coronavirus restrictions affecting inbound, outbound and transit passenger flows in the United Arab Emirates.

With the rapid spread of the virus globally, at least 31 countries and regions have adopted entry restrictions, a devastating blow to the global aviation industry. De Juniac said this crisis is far worse than that experienced after the 9/11 attacks.

Airlines will run out of cash before the recovery lands. Most airlines had sufficient cash for two months at the start of this year, according to IATA.

Aviation and travel market intelligence provider CAPA has warned that most of the world's airlines may face bankruptcy by May if there is no support from governments by that time.

But the good news is that more countries are taking measures to save the hemorrhaging industry, and China's domestic air travel has shown signs of reaching a turning point as passenger yield stabilizes.

China Eastern Airlines said earlier that it plans to resume 14,329 flights from February 1 to March 28. In domestic flights part, it mainly resumes flights from Shanghai and Kunming in Southwest China's Yunnan Province to cities such as to Chongqing, Chengdu, Dalian and Guangzhou. Now, the sum of daily flights for the carrier is more than 1,000.

Traveler intelligence provider Adara has identified a new upward trend in data relating to Chinese travel in an analysis published on Saturday, according to ttgasia.com.

China has introduced a number of supportive measures including reductions in landing, parking and air navigation charges, as well as subsidies for airlines that continue to operate flights to the country.

On Tuesday, the government said it will support carriers to increase international cargo flight capacity and stabilize supply chains, and will encourage air cargo firms and logistics companies to jointly restructure.