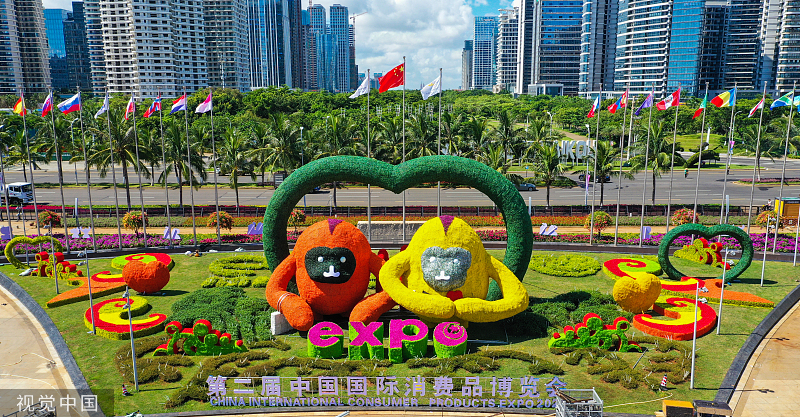 The expo, which concluded on Saturday in Haikou, capital of South China's Hainan province, attracted exhibitors from 61 countries and regions. Some 2,800 brands from 1,955 domestic and international enterprises participated in the exhibitions.

China is committed to opening up further and is increasingly determined to unleash the potential of its market by boosting consumption, Megarbane said. It was also the second time L'Oréal has exhibited at the expo, and it this year expanded its exhibition area to 625 square meters.

There were over 50 French companies and nearly 250 French brands participating in the expo held on the resort island of Hainan. France was the guest country of honor at this year's CICPE and, after China, the second-largest exhibitor.

Durian, coffee, snacks and various delicacies exhibited by Thailand's Charoen Pokphand Group were audience favorites during the event. "The expo is a very good platform and is in line with the development strategy of our company," said Xue Zengyi, senior vice chairman of the group's Agro-Industry and Food Business China Area.

Attracted by the preferential policies of the Hainan Free Trade Port, the group increased its investment in Hainan and established a global trade company in 2021.

Xue said the company hopes to import the world's best consumer goods into Hainan and then push them from Hainan to the Chinese market, and, at the same time, bring high-quality Chinese consumer goods to the world. Oranuch Wannapinyo, commercial consul of Commercial Section at the Thai Consulate-General in Guangzhou, said she believes that in participating in the expo, more premium and high-quality Thai brands will be promoted to the Chinese market and across the globe.

Foreign direct investment inflows, in actual use, increased 17.4 percent year-on-year to 723.31 billion yuan ($107.3 billion) in the first six months, according to the Ministry of Commerce. Vice-Minister of Commerce Sheng Qiuping said that during the expo, the number of foreign exhibitors and brands increased significantly, the international exhibition areas expanded, and the quality of economic and trade activities also improved, which shows that the expo's platform role has become more prominent and the Chinese market has become more attractive.