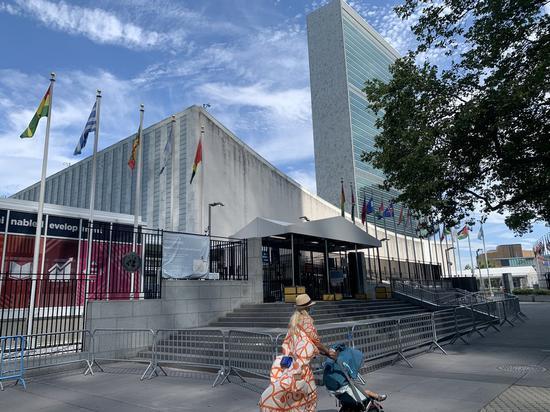 A woman walks with a baby stroller in front of the United Nations (UN) headquarters in New York, the United States, July 20, 2020. (Photo: Xinhua)

The United Nations said on Monday that global economic recovery remains precarious in 2021 and the rebound of 4.7 percent would barely offset the losses of 2020.

In 2020, the world economy shrank by 4.3 percent, over two and half times more than during the global financial crisis of 2009. The modest recovery of 4.7 percent expected in 2021 would barely offset the losses of 2020, according to the latest World Economic Situation and Prospects.

The report warns that the devastating socio-economic impact of the COVID-19 pandemic will be felt for years to come unless smart investments in economic, societal and climate resilience ensure a robust and sustainable recovery of the global economy.

The report underscores that sustained recovery from the pandemic will depend not only on the size of the stimulus measures, and the quick rollout of vaccines, but also on the quality and efficacy of these measures to build resilience against future shocks.

"We are facing the worst health and economic crisis in 90 years. As we mourn the growing death toll, we must remember that the choices we make now will determine our collective future," said UN Secretary-General Antonio Guterres.

"Let's invest in an inclusive and sustainable future driven by smart policies, impactful investments, and a strong and effective multilateral system that places people at the heart of all socio-economic efforts," the top UN official added.

Developed economies, projected to see a 4 percent output growth in 2021, shrank the most in 2020, by 5.6 percent, due to economic shutdowns and subsequent waves of the pandemic, increasing the risk of premature austerity measures that would only derail recovery efforts globally. Developing countries saw a less severe contraction at 2.5 percent, with an expected rebound of 5.7 percent in 2021, according to the estimates presented in the report.

The UN Department of Economic and Social Affairs (DESA) says that 131 million more people were pushed into poverty in 2020, many of them women, children and people from marginalized communities. The pandemic has adversely affected women and girls disproportionately, exposing them to increased risk of economic devastation, poverty, violence and illiteracy.

Women make up more than 50 percent of the workforce in high-risk labor and service intensive sectors, such as retail, hospitality and tourism -- areas hardest hit by the lockdown. Many of them have limited or no access to social protection.

Massive and timely stimulus measures, amounting to 12.7 trillion U.S. dollars, prevented a total collapse of the world economy and averted a Great Depression. However, stark disparity in the size of the stimulus packages rolled out by developed and developing countries will put them on different trajectories of recovery, highlights the report.

Moreover, financing these stimulus packages entailed the largest peacetime borrowing, increasing public debt globally by 15 percent. This massive rise in debt will unduly burden future generations unless a significant part is channeled into productive and sustainable investment, and to stimulate growth.

According to the report, global trade shrank by an estimated 7.6 percent in 2020 against the backdrop of massive disruptions in global supply chains and tourism flows. Lingering trade tensions between major economies and stalemates in multilateral trade negotiations were already constraining global trade before the pandemic.

"The current crisis reiterates the importance to revitalize the rule-based multilateral trading system to put the world economy on the trajectory of a robust and resilient recovery," said the UN undersecretary-general for economic and social affairs, Liu Zhenmin. "We must make global trade resilient to shocks to ensure trade remains the engine of growth for the developing countries."

The report highlights opportunities for developing countries if they can prioritize investments that advance human development, embrace innovation and technology, and strengthen infrastructure, including creating resilient supply chains.

Stressing the importance of stimulating investments, the report shows that while the majority of the stimulus spending went into protecting jobs and supporting current consumption, it also fueled asset price bubbles worldwide, with stock market indices reaching new highs during the past several months.

"The depth and severity of the unprecedented crisis foreshadows a slow and painful recovery," said UN Chief Economist and Assistant Secretary-General for Economic Development Elliott Harris. "As we step into a long recovery phase with the roll out of the vaccines against COVID-19, we need to start boosting longer-term investments that chart the path toward a more resilient recovery -- accompanied by a fiscal stance that avoids premature austerity and a redefined debt sustainability framework, universal social protection schemes, and an accelerated transition to the green economy."

An unprecedented crisis -- one that has killed more than 2 million people, uprooted many more lives, forced families into poverty, exacerbated income and wealth inequality between communities, disrupted international trade and paralyzed the global economy -- needs an extraordinary response.

Ultimately, the report underscores the importance of achieving the Sustainable Development Goals -- the blueprint for a fair, peaceful and resilient world.

"Promoting inclusive and equitable growth, reducing inequality and enhancing environmental sustainability is the best plan we have to recover from this crisis and safeguard the world against future crises. Building resilience must guide every aspect of the recovery and we will find women playing critical roles as champions of resilience," added Maria-Francesca Spatolisano, UN assistant secretary-general for policy coordination and inter-agency affairs in the DESA.