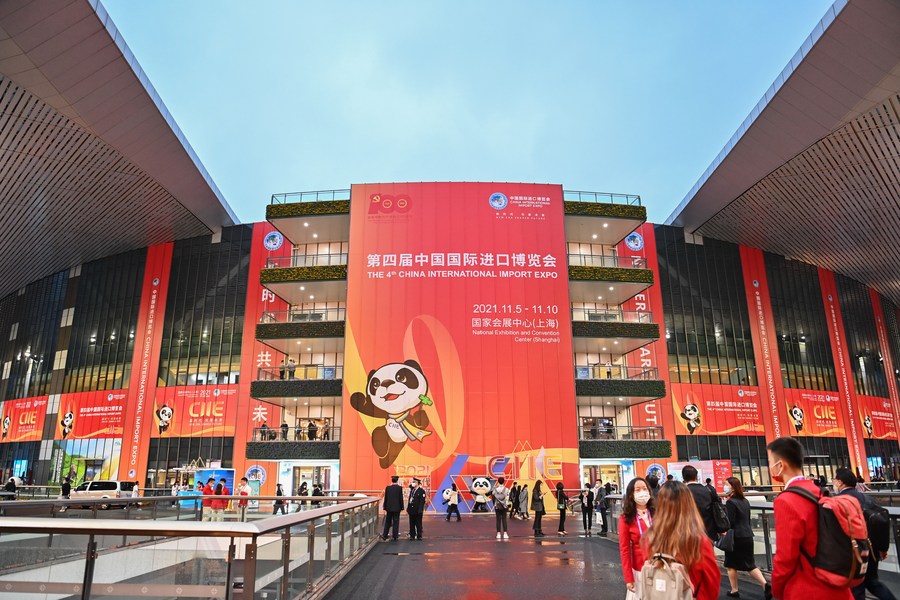 SHANGHAI - Global enterprises are keen to attend this year's China International Import Expo (CIIE) in November, seeking to tap the huge Chinese market, as the country continues to open its doors wider to the world.

Eighty-five percent of the planned enterprise exhibition area has been booked for the fifth CIIE, which is scheduled to be held in Shanghai from Nov 5 to 10, according to the event's organizers.

Over 270 Fortune 500 companies and industry-leading enterprises have confirmed their participation in the event, CIIE Bureau Deputy Director Sun Chenghai told a press briefing on Wednesday marking the event's 100-day countdown.

"Preparations for the expo are progressing smoothly as organizers have overcome the adverse impacts brought about by risks and uncertainties, including the COVID-19 pandemic," Sun said.

The enthusiasm of the global enterprises attending the import expo is based on China's booming market.

Fabrice Megarbane, president of L'Oreal North Asia Zone and chief executive officer of L'Oreal China, said the CIIE is not only a big stage for the debut of new products, but also allows the cosmetics giant to demonstrate its determination to shift to green and low-carbon consumption.

A new-generation patient-monitoring system produced by Edwards Lifesciences has recently gone on sale in China, less than nine months after its China debut at the fourth CIIE.

The smart product caught the eye of quite a number of medical institutions soon after its appearance in Shanghai, and this has boosted the firm's confidence to further penetrate the Chinese market, said George Ye, general manager of Edwards Lifesciences Greater China.

The expo organizers have also held activities to help the exhibitors better tap the Chinese market.

The CIIE Bureau has held seven online business roadshows, and has arranged for 100 exhibitors to attend a business cooperation activity in East China's Jiangxi province from Saturday to Tuesday.

Ai Zhouping, president of Heraeus Greater China, said the trip to Jiangxi has made him fully feel the vitality, potential and resilience of the Chinese market.

Jens Hildebrandt, executive director and board member of the German Chamber of Commerce in China -- North China, said the CIIE is an opportunity for companies to market themselves.

"There are smaller and medium-sized German enterprises that, through CIIE, are able to boost their sales in the market," Hildebrandt said.

"Almost all German companies see the growth market of the next decade in China, and that's why German companies are very much eager to see and participate in the development of China," he added.

Apart from the six-day expo, Shanghai has set up 60 regular trading platforms for the exhibitors. Over the years, the platforms have imported 248 billion yuan ($36.6 billion) worth of goods, said Gu Jun, head of the Shanghai municipal commission of commerce.

To alleviate the impacts of the pandemic and global economic uncertainty on participating small and medium-sized enterprises, the fifth CIIE will not only actively promote the normalization of supporting policies such as tax incentives and customs clearance facilitation, but will also offer more free booths for enterprises from the least developed countries, said CIIE Bureau Deputy Director Sun.