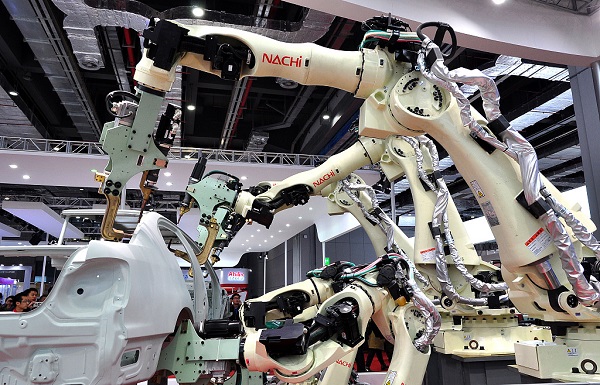 "We saw a dynamic performance in 2018 with a new sales record, even as the main customers for robots -- the automotive and electrical-electronics industry -- had a difficult year," said IFR President Junji Tsuda.

In 2019, however, the federation expects global sales to "recede" from the record level reached in the previous year.

Having experienced a slight setback in the current year, the industrial robot market is anticipated by the IFR to recover with annual growth rates reaching 12 percent between 2020 and 2022.

"IFR's longer term outlook shows that the ongoing automation trend and continued technical improvements" would result in an estimated sales volume of about 584,000 units in 2022, Tsuda said.

Still, China remained the largest market for industrial robotic solutions with a share of 36 percent of the world's robot installations in 2018, followed by Japan and the United States.

Chinese manufacturers of industrial robots have increased their market share by 5 percent to more than one quarter, while the share of other suppliers declined.

Industrial robot sales in the U.S. rose year on year by 22 percent to 55,000 units in 2018, marking the eight increase in a row, according to the IFR. The driver of growth in "all manufacturing industries in the U.S. has been the ongoing trend to automate production in order to strengthen the U.S. industries in both domestic and global markets," said the IFR.

Germany was the world's 5th largest industrial robot market. In 2018, the number of robots sold in Germany increased to nearly 27,000 units, an all-time record. Most of these robots were installed by the German automotive industry.