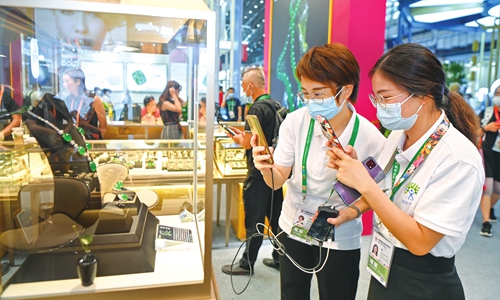 According to a report by Bain & Company, the world's leading advisor to the global luxury goods industry issued during the expo, China luxury goods market will see a rapid recovery in the second half of the year from the short-term impact caused by the epidemic.

Domestic consumption of luxury goods reached 470 billion yuan ($69.60 billion) last year, accounting for about 21 percent of the global market, according to Bain & Company.

"Local consumer appetite remains strong and will potentially lead the country to recover between late 2022 and early 2023," the company said in a report sent to the Global Times.

In particular, the island's offshore duty-free shops have become an important channel to attract overseas and high-end consumer goods brands to share the opportunities in the Chinese market.

Commitment to the Chinese market

Among the luxury giants, many of them have been attending the expo for two consecutive years, demonstrating their commitment to Chinese market with eye-catching exhibits and new expansion plans.

Fine jewelry brand Qeelin presented a unique Hainan Gibbon jewel for charity auction during the expo and all proceeds will go toward the Hainan Provincial Forestry Bureau to support the protection of Hainan's tropical rainforest and Hainan gibbons, the company told the Global Times on Wednesday.

Mark Lu, president of Daniel Hechter Greater China, told the Global Times on Tuesday on the sidelines of the CICPE that it has plans to expand retail network in China to 200 stores within three years from a current 80.

The French fashion and lifestyle brand has been present in the Chinese market for 18 years, with its current footholds mostly encapsulating Beijing, Shanghai, the Guangdong-Hong Kong-Macao Greater Bay Area and the Hainan FTP, according to Lu.

Moet Hennessy in representation of the French luxury group LVMH took stage of the consumer expo for the second consecutive year.

"We play a positive role in China's economy and continue our efforts", LVHM Greater China President Andrew Wu told reporters on the sidelines of the consumer products expo on Monday.

The fallout from the COVID-19 and other short-term challenges facing the retail sector in China do not change the Group's long-term commitments to the Chinese market, Wu said, noting that LVHM remains upbeat about young Chinese consumers.

On behalf of LVMH Perfumes & Cosmetics Division, Wu signed a memorandum of cooperation with Vice Mayor of Haikou Lu Min on Monday during the expo, further preparing for related supply chain development in Haikou to support future business growth.

The French conglomerate registered a fully owned perfumes and cosmetics subsidiary in Hainan in March and had by end of June finalized its first batch of import shipments.

FTP brings opportunity
According to the report from Bain & Company, as of 2021, the Hainan FTP accounted for about 13 percent of total sales in China's domestic luxury market.

With the construction of the Hainan FTP in full swing and the offshore duty-free policy fueling the Hainan tourism industry, Hainan offers vast business opportunities to international companies, according to Pernod Ricard, an internationally renowned wine and spirits group, which takes the stage for the second consecutive year at the CICPE.

"We have truly felt the rapidly flourishing momentum and the continuously optimized business environment, which have provided enormous opportunities for Pernod Ricard to accelerate our retail growth and deepen our roots in China," the wine and spirits group said in a statement sent to the Global Times, citing Jerome Cottin-Bizonne, managing director of Pernod Ricard China.

In the following two years since the policy shift, sales volume of offshore duty-free goods in Hainan has reached 90.6 billion yuan, with 125 million items sold and 12.28 million tourist visits as of end of June, according to Haikou Customs.

Erik Juul-Mortensen, President of Tax Free World Association (TFWA) said at a forum at CICPE on Tuesday that the establishment of the Hainan Free Trade Port will create even more opportunities for brands and retailers.

"Hainan is a wonderful example of what can be done when governments and regulatory bodies recognize the benefits of duty free shopping, for the national economy and for the travelers. The growth of the offshore duty free market in Hainan has been phenomenal, but there is still potential for more," he said.