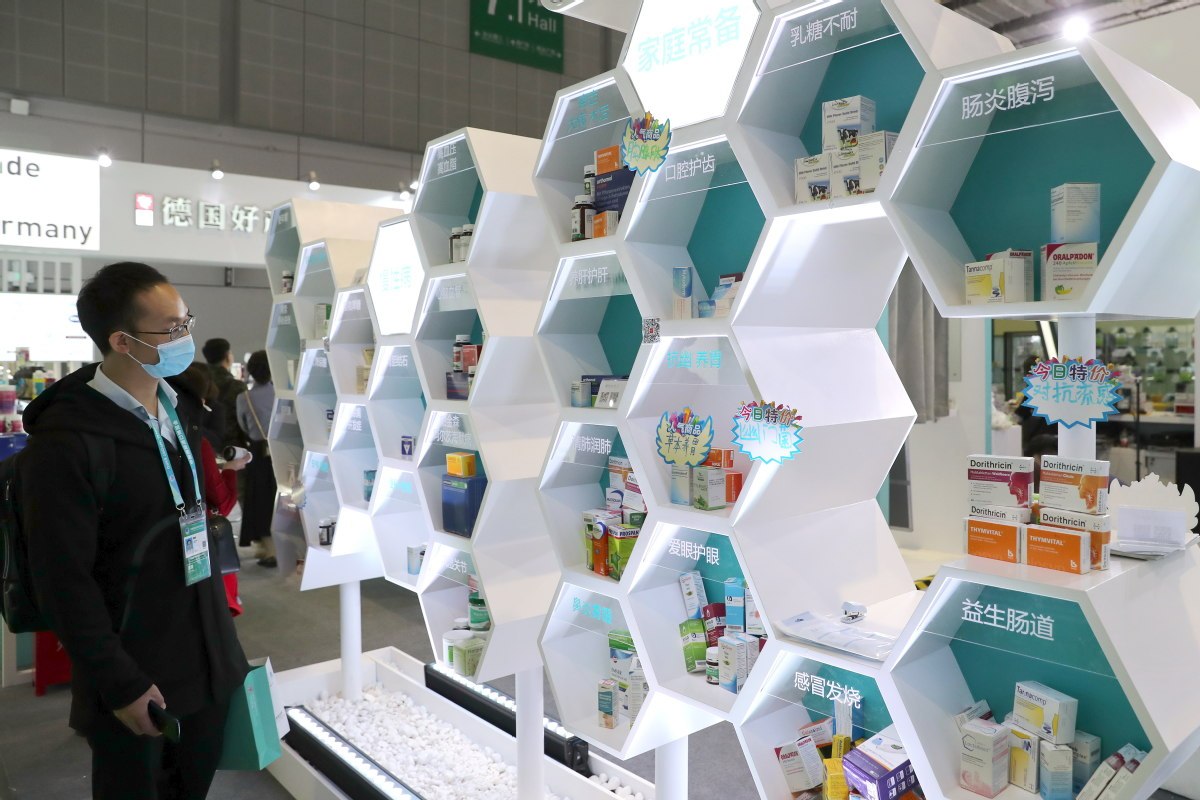 A visitor looks at medicines on display at the third China International Import Expo in Shanghai.(Photo: China Daily)

Novo Nordisk, the Denmarkbased biopharmaceutical company, inked an agreement on Saturday to set up a new entity for research and development, marketing, import and distribution of finished medicines. The new entity, Novo Nordisk (Shanghai) Pharma Trading Co Ltd, will be set up in the Lingang New Area, a section of the China (Shanghai) Pilot Free Trade Zone, and have a total investment of 200 million yuan ($30 million).

"China's continuously improving business environment, growing innovation ecosystem, and its stable policy environment gives us confidence in the future of the market," said Christine Zhou, senior vice-president and president for the China region for Novo Nordisk.

According to Zhou, the country's dual circulation development pattern has inspired Novo Nordisk to further grow its research and development activities from China and for China.

"With the help of the measures to deepen China's reform and opening-up such as the hosting of the CIIE, the company will work to grow its business and make changes in the diabetes and other chronic disease situations in the country," Zhou said.

In October 2019, Roche upgraded the center into the Roche Innovation Center Shanghai, making it the company's third global R&D center following the one at its headquarters in Basel, Switzerland, and the other in San Francisco, the United States. The new center is focused on the research and early development of innovative drugs for treating immunity, inflammation and anti-infectious diseases. It currently has about 150 scientists, with over 90 percent of them coming from China.

By the end of August, 257 invention patent applications had been submitted based on inventions and creations from the center, and 144 had been granted in China, the US, the European Union, and Japan. In addition, nine molecules, the development of which involved the innovation center, have entered clinical trial phases.

US-based Pfizer, which established the Pfizer (China) Research and Development Center in Shanghai in 2005, said the center is a key pivot in the company's global R&D network and the company will continue to prioritize China with increasingly core technologies and resources.

Jessie Chen, general manager of the Pfizer (China) Research and Development Center, said the company hopes to step up collaborations with the industry. "We want to create a world-class biopharmaceutical R&D ecological environment in China, which is part of the shared global R&D community, and help the country's local clinical research go international," she said.

The company's goal is for China to be involved in at least 80 percent of its global early-phase and key clinical research programs within three years and 80 percent of its programs to be submitted for approval in the country simultaneously and to be introduced to the market.

Moreover, the company plans to gradually involve the country in more phase I and II clinical trials to assist Chinese medical workers to accumulate experience in this area. It will also make innovative drugs available to Chinese patients more quickly, the company said.

The global phase III clinical trials of an innovative targeted drug to treat lung cancer, which was approved in the country last year, was led by a professor in Guangdong province and another in Hong Kong. The therapy was also approved in many other countries and regions with its clinical trial results.

Boston Scientific established its first overseas R&D center in Shanghai a decade ago. A team of more than 70 local engineers has leveraged insights into the local market to roll out products that meet local patients' needs and international requirements.

A star exhibit from the company at the CIIE, which avails of digital technologies to provide remote clinical support for physicians, was developed by the China R&D team.