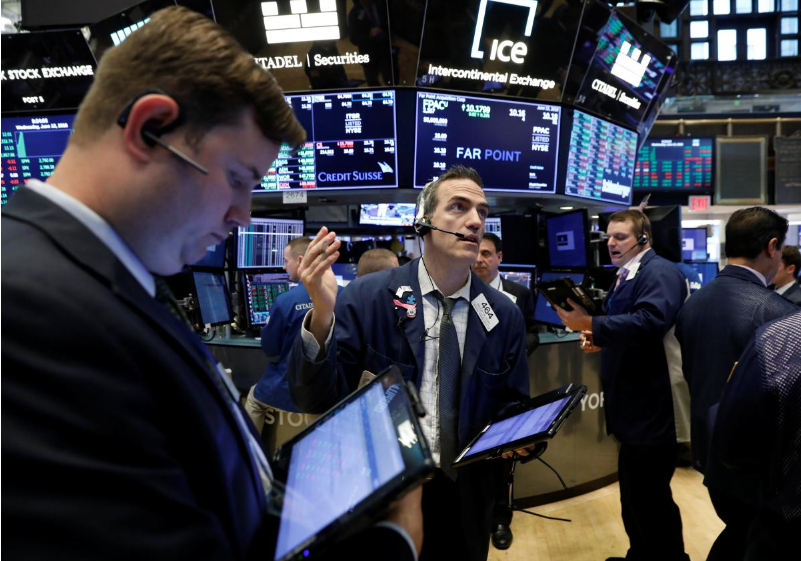 Traders work on the floor of the New York Stock Exchange (NYSE) in New York City, US June 13, 2018 (Photo: Reuters)

Stocks across the globe wavered on Wednesday on fears of trade tensions and questions about US interest rates, while lower-than-expected inventory data sent oil prices into the black after morning losses.

But market participants are keen to know how many times the Fed will raise rates in 2018, with market pricing “fairly split between three and four hikes,” Deutsche Bank strategist Jim Reid wrote in a note to clients.

Amid the uncertainty, Wall Street opened slightly firmer, buoyed by a jump in media stocks after Tuesday’s court ruling allowing AT&T’s $85 billion take over of Time Warner - a move expected to trigger a wave of corporate mergers.

Shares of the HBO channel owner jumped about 3 percent after the approval, while AT&T dropped 1.6 percent.

Overall, stock markets were moving up, but tepidly.

The pan-European FTSEurofirst 300 index .FTEU3 rose 0.19 percent, and MSCI's gauge of stocks across the globe .MIWD00000PUS, which has been stagnating near one-month highs for about a week, gained 0.09 percent.

Along with the Fed and other key central bank policy meetings this week, fresh fears of protectionism are weighing on stocks and currencies as the US prepares to unveil more tariffs on $50 billion worth of Chinese goods.

Trade tensions pressured the Mexican peso and Canadian dollar, which gained 0.46 and 0.35 percent, respectively, versus the greenback.

Oil prices, which had started the day in the red, rose after a report by the Energy Information Administration indicated US crude inventories fell more than anticipated last week and while gasoline and distillate stocks surprised with unexpected declines.

“You tend to want to see draws in gasoline early in the summer with driving season, and this is the first number that actually does that ... in three weeks,” said Bob Yawger, director of energy futures at Mizuho in New York.

In government bonds, US Treasury yields were flat on Wednesday, moving in narrow ranges, with investors firmly focused on the Fed meeting.

Italian government bonds were in demand, as well, after Paolo Savona, the country’s new EU Affairs Minister, said the euro was “indispensable.”

The comments by Savona, who has previously expressed hostile views on the euro, followed statements earlier in the week by Italy’s new coalition government that it had no plans to leave the euro zone.

In another reminder of the danger of trade disputes, shares in Chinese telecommunications giant ZTE Corp fell as much as 41.5 percent, wiping $3 billion off its market value, as it resumed trade after agreeing to pay up to $1.4 billion in penalties to the US government.