General Motors (GM) has recently sped up its product changeover in China, trying to reverse the sales downturn in the world's largest car market. 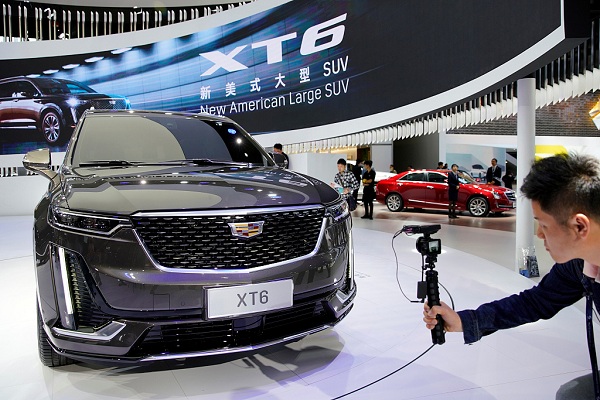 A new Cadillac XT6 SUV of GM is presented during the media day for Shanghai auto show in Shanghai, China, on April 16, 2019. (File Photo: VCG)

The leading U.S. automaker and its joint ventures delivered a total of 753,926 vehicles in China in the second quarter of this year, down from 858,344 units in the same period in 2018, recording a 12.2 percent decline.

In a bid to boost sales, GM and its Chinese partners have launched new Buick Encore SUV series, the luxury Cadillac SUV XT6, and the low-end Baojun 510 compact SUV in China during the first three weeks of July.

The all-new Encore small SUV, and Encore GX compact SUV, positioned between the smaller Encore and the larger Envision, were part of eight new and refreshed Buick products to be introduced to Chinese consumers in 2019.

The new vehicles "will give Buick a strong presence across small, compact, midsize and large SUVs in its largest market - strengthening the brand's overall competitiveness in one of the most competitive segments," said Molly Peck, executive director of Buick for SAIC-GM, a Shanghai-based joint venture.

Buick, suffering a 14.1 percent decline in sales during the second quarter in China, has pinned its hopes on the booming SUV market.

In Shanghai, the economic and financial hub on China's eastern coast, Cadillac launched its newest three-row luxury SUV, the XT6. The high-end SUV is available in five variants, with packages featuring some latest technologies.

Even in a weak second quarter, GM said its brands continued to progress and expand their presence in China, with the luxury brand Cadillac delivering 66,523 units, seeing a 36.6 percent year-on-year rise.

GM's most recent debut was for the new Baojun 510 compact SUV in Liuzhou, another industrial city in southern China.

Baojun is a local brand from a GM joint venture in Liuzhou. Since 2017, nearly 800,000 Baojun 510s have been sold nationwide. Baojun SUVs are especially popular among young consumers, with attractive starting price for new 510 models at 10,700 U.S. dollars.

GM has 11 joint ventures, two wholly owned foreign enterprises and more than 58,000 employees in China. In 2018, GM delivered some 3.6 million vehicles in China, more than its American peers Ford and Chrysler did.

However, car sales in China remained sluggish in the first half of this year after a weak performance in 2018, registering a 12.4-percent drop year on year, according to China Association of Automobile Manufacturers.

Prolonged trade frictions between China and the United States have added to the woes, said market experts.

Yet China's car sales rebounded in June as automakers and dealers ratcheted up promotion before new emission standards went into force in some regions in July.

Despite all the negative factors, GM has announced to introduce some 20 new and refreshed models in China in 2019. Around two-thirds will arrive in the second half, with a sharpened focus on luxury vehicles and midsize or large SUVs.