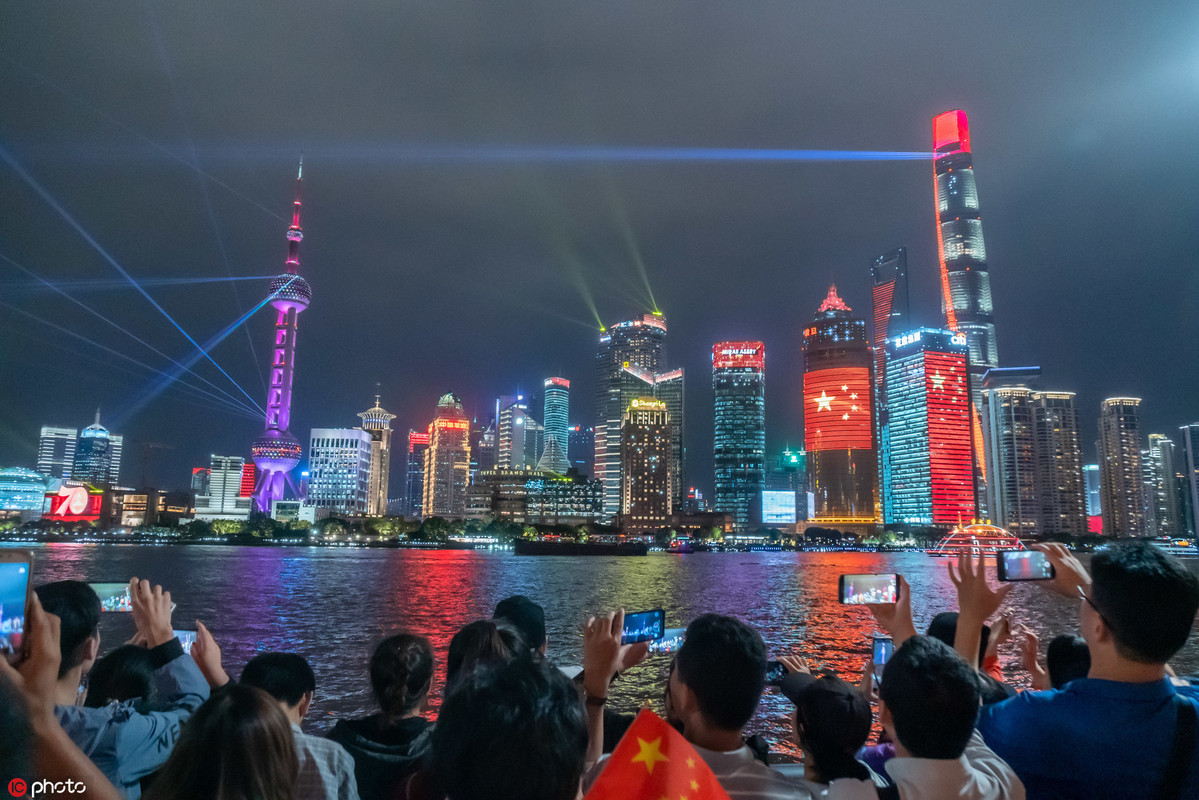 Tourists gather to enjoy the light show at the Bund in Shanghai on Oct 6, 2019. [Photo/IC]

From Oct 1 to 7, total sales of China's retail and catering firms reached 1.52 trillion yuan (about $215 billion), up 8.5 percent year-on-year, according to the Ministry of Commerce.

Consumption in the culture and entertainment sector was also strong. Chinese mainland box office revenue totaled about 5 billion yuan during Golden Week, making it the highest-grossing National Day film season in history, thanks to blockbusters featuring the 70th anniversary of the founding of the People's Republic of China.

Tourism revenue also saw a record of nearly 650 billion yuan during the period, up 8.47 percent year-on-year, official data showed. A total of 782 million domestic tourist trips were made during the holiday.

"The booming 'holiday economy' shows China's economy and consumption are transforming as the country further implements its high-quality upgrading," said Xu Guangjian, a professor from the School of Public Administration and Policy of the Renmin University of China.

A total of 8.594 billion transactions were processed by the platform during the past week, involving 4.33 trillion yuan in volume.

"The surging transaction volume of online payments reflects the shift in people's preferred payment method and the development of China's online payment market," said Dong Ximiao, a researcher with the National Institution for Finance and Development.

The demand for high-quality and customized tours is on the rise. "Red tourism," or revolutionary-themed tourism, has gained popularity.

About 78.84 percent of tourists participated in activities celebrating the 70th anniversary of the founding of the People's Republic of China, according to statistics from the Ministry of Culture and Tourism.

The impact of culture-related trips and nighttime events is also noticeable as about 66.4 percent of tourists visited culture- and history-themed tourist sites, while 44.96 percent participated in nighttime tourist activities.

In addition, the per capita consumption in duty-free stores at airports has exceeded 2,000 yuan, as outbound tourists purchased products in domestic airports when they returned.