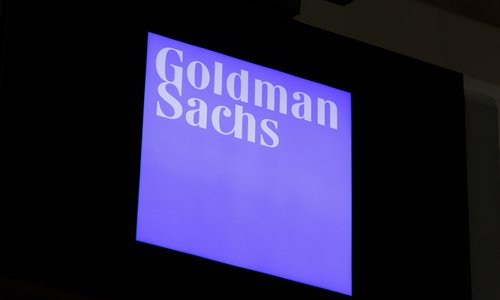 A view of a sign for Goldman Sachs at the New York Stock Exchange in November 2018 .(Photo: IC)

US investment banks Goldman Sachs and Morgan Stanley have received an approval from China's securities regulator to raise their stakes and take majority holdings in their China securities joint ventures on Friday, a sign that China's efforts of further opening up have not been hindered by the COVID-19 situation.

In 2018, China announced it would cancel rules that limit foreign investment in domestic banks and financial asset management companies in an effort to push forward financial opening-up.

Swiss bank UBS was the first foreign bank to hold a majority stake in its China joint ventures, followed by Nomura Holdings and JPMorgan.

The latest approval also comes amid a worsening COVID-19 situation across the world, which has greatly dragged global economic growth, and some have warned of a global recession amid the spreading pandemic.

As China's domestic situation has eased with its all-out efforts over the past weeks, it is ramping up efforts to roll out measures to shore up confidence and steadily implement its promise of providing a fair and transparent environment for foreign firms.

China will continue to accelerate the resumption of work and operartions of foreign-funded enterprises, increase the implementation of various policies to stabilize foreign investment, and ensure that domestic and foreign-funded enterprises enjoy equal access to support policies, Chinese Vice Commerce Minister Wang Shouwen said during the national conference on foreign investment on Friday.

Wang added that foreign firms' long-term confidence in China has not be altered due to the virus, noting that though the work of stabilizing the foreign investment is "severe and complicated," the long-term growth trend and China's competitive strength in industrial support, human resources, infrastructure and investment environment have not changed.