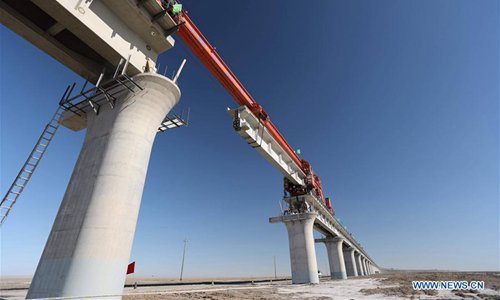 Photo taken on Aug. 17, 2018 shows a construction site of Taitema Lake Bridge of Golmud-Korla railway in Ruoqiang County, northwest China's Xinjiang Uygur Autonomous Region. The closure of the 24,558-meter railway bridge, was finished on Friday after a two-year construction period. Golmud-Korla railway, connecting Golmud in Qinghai and Korla in Xinjiang, will cut the traffic time between Golmud and Korla from 26 hours to 12 hours. (Photo: Xinhua)

The Golmud-Korla railway is a strategic rail line and is of great significance to integrating and improving western China's transport system, promoting the regional economy, strengthening ethnic unity and national security there, and serving countries under the Belt and Road initiative as well.

The line has a total length of 1,206 kilometers, and is one of the major transportation passages linking China with Central and West Asia, and Europe.

At the end of June, the Qinghai section of the Golmud-Korla railway (Gulmud-Mangyazhen line) commenced operation.

Now it's Xinjiang's turn. The Xinjiang section is 734 kilometers long with the maximum operating speed of 120-km per hour, passing through eight passenger stations including Ruoqiang, Yuli and Korla. Two pairs of cargo trains from Golmud to Korla have also been completed.