US tech giant Google values the Chinese market for its great potential in artificial intelligence (AI) development, despite the risk that growing trade tension between China and the US could hinder technology cooperation. 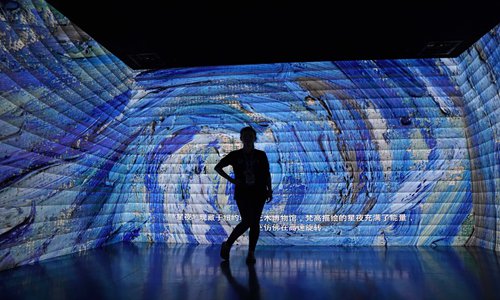 A visitor checks out Google's AI-powered Arts and Culture display at the World Artificial Intelligence Conference held from Monday to Wednesday in Shanghai. (Photo: Global Times)

AI is a global phenomenon, which will require a lot of investment, research and hard work to improve the technology, Google Vice President Jay Yagnik told the Global Times in an interview on Tuesday during the World Artificial Intelligence Conference (WAIC), held from Monday to Wednesday in Shanghai. "Historically, technology has been a great uniter globally… So instead of thinking about competition, I think we should really think about it in terms of bringing the world together and taking society to this next level," the vice president said.  Yagnik noted that AI development will require cooperation across a wide range of industries in different countries.  The US company's AI technologies have become a major gateway for Chinese people to access its services, and some business representatives anticipate the return of the company's search function in the mainland. Goolge pulled its search engine services from the mainland in 2010  and shifted its domestic strategy toward being more business focused. But its recent plan to unveil a new version of its search engine sparked speculation about a possible return for the service in China. "Our company has been working with Verily [a surgery software start-up incubated by Google's AI platform] for a year, and we hope to work more with Google in the future," Jerry Xing, an employee of a Shanghai-based pharmaceutical company, told the Global Times on Tuesday. Google has developed deep-learning tools that can help doctors and clinics in diagnosing diseases, "which is very useful for us," he said. Value of Chinese market The growing trade tension does not appear to have affected US tech firms' determination to invest in China. "US companies' increasing investment in China reflects their pragmatic view," Li Yi, a senior research fellow at the Internet Research Center under the Shanghai Academy of Social Sciences, told the Global Times."With the largest number of web users across the globe and an open attitude toward internet development, China for sure attracts foreign tech firms to come here," he said.  It has been suggested that part of Google's interest in China's AI market is based on the company's desire to mine the huge amounts of data available domestically, but Yagnik pointed to a broader approach. "Our focus is not so much opportunistic; we are really focused on helping this global change to happen," he said, noting that China's advancement in the sector will accelerate global deployment of AI. "At some point, when AI is mature, we may not need big data," Yagnik said, noting that smaller datasets will be fine as the underlying techniques will have been improved. Google did not touch on the new version of the company's search engine or its possible return to the Chinese market at the Tuesday event.