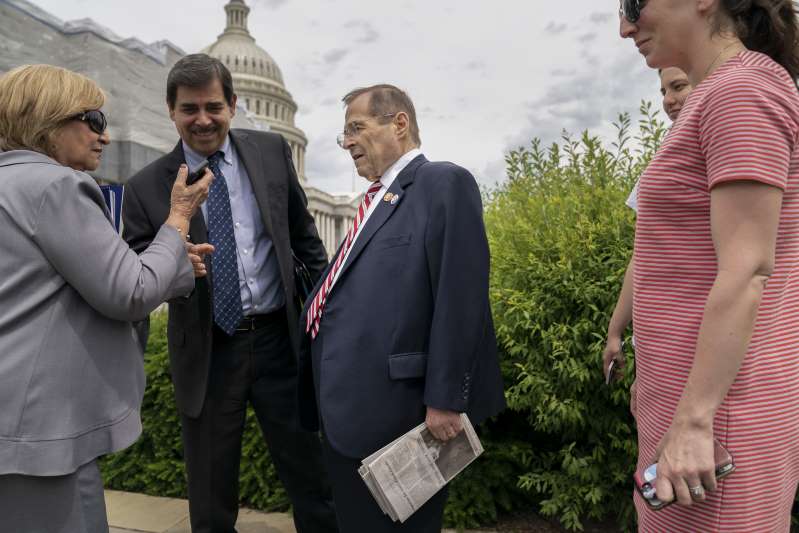 Two people ask to take a photo with House Judiciary Committee Chairman Jerrold Nadler, D-N.Y., center, as the Senate and the House of Representatives shut down for the week-long Memorial Day recess, at the Capitol in Washington, Thursday, May 23, 2019. (Photo: AP)

Plunging ahead despite paralyzing partisanship in the nation's capital, senior lawmakers of both parties Thursday proposed legislation to tackle "surprise medical bills" and other concerns, from prescription drug costs to uneven vaccination rates.

The draft bill from Sens. Lamar Alexander, R-Tenn., and Patty Murray, D-Wash., echoes a time when health care issues often led to dialogue and cooperation between political parties. Alexander chairs the Health, Education, Labor and Pensions committee, while Murray is the ranking Democrat.

"We can make progress when both sides are at the table ready to put patients and families first," Murray said in a statement. Alexander said he wants to bring the bill to the Senate floor in July and get legislation on President Donald Trump's desk.

But with Trump threatening to halt all cooperation with Democrats unless House Democrats stop investigating him, the outlook is unclear. Alexander says his bill represents "common sense steps" — more than 30 specific ideas — that are readily achievable.

"Surprise medical bills" are the shockingly high charges insured patients can get hit with when a hospital or doctor is not in their insurers' network. Earlier this month, Trump held a White House event to declare his eagerness to sign a fix into law.

The Alexander-Murray legislation would protect patients by limiting their financial responsibility to their own plan's in-network rates, when they receive emergency care at an out-of-network hospital, or when an out-of-network clinician provides services at an in-network facility.

But the legislation remains a work-in-progress, since lawmakers still have to figure out how hospitals, doctors and insurers would settle the costs among themselves. Insurers and employers who sponsor workplace coverage favor a set formula for calculating fees, while hospitals and doctors are calling for arbitration.

Alexander and Murray have plenty of company on surprise medical bills, since lawmakers in both chambers of Congress have advanced various proposals. A lobbying war has broken out between insurers and employers on one side, and hospitals and doctors on the other, over how to determine payments once patients are no longer liable for out-of-network care.

On prescription drugs, the bill includes a smorgasbord of measures aimed at indirectly lowering drug prices. But none of the proposals would require drugmakers to lower their prices or authorize the government to negotiate better deals.

Instead, several sections of the bill would discourage industry tactics long used to delay the launch of lower-priced generic medications. For instance, branded drug manufacturers routinely file frivolous petitions with the Food and Drug Administration against potential generic competitors, often delaying their entry to the market for months. The bill would empower the FDA to ignore such petitions.

Among other provisions, the bill would:

— Authorize a national campaign to promote vaccination to prevent disease and control its spread. The campaign would "combat misinformation" and circulate scientific evidence making the case for vaccinations. The recent US measles outbreak has been blamed on lagging vaccination rates in parts of the country.

— Call on the Health and Human Services Department to set up a grant program for improving medical care for pregnant women, with the aim of preventing maternal deaths and complications. Another grant program would focus on improving care for infants.

Missing from the legislation are any provisions to stabilize coverage under the Affordable Care Act, or mitigate the potentially far-reaching consequences if opponents succeed in a lawsuit to strike down the law as unconstitutional. Alexander and Murray had earlier written a bipartisan bill to shore up the health law's insurance markets, but the effort failed.

Before the political wars over the Obama-era health law, it was not uncommon to see lawmakers of both parties working side by side on health care. Federal mental health parity legislation grew out of bipartisan collaboration. The Medicare prescription drug benefit under Republican President George W. Bush had support from key Senate Democrats.