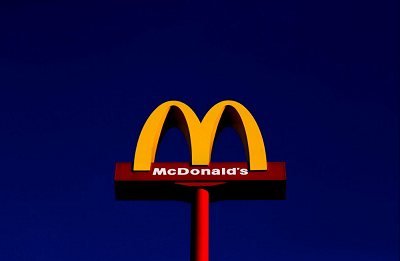 A sign for the US fast food restaurant chain McDonald's is seen outside one of their restaurants in Sint-Pieters-Leeuw, near Brussels, Belgium February 14, 2018. (File Photo: Reuters)

High-margin “gourmet” burgers which offer fresh and more expensive ingredients, costing $6 or $7 a time compared to the chain’s $1 to $3 value options, raised the overall average US check value.

“[This] shows the power of the brand ... globally the numbers were outstanding,” Peter Saleh, an analyst with brokerage BTIG, said. “The results were very impressive, actually more impressive than we initially had anticipated.”

Excluding items, the company earned $1.79 per share, beating the estimate of $1.67. Revenue overall fell 9 percent as a result of refranchising - a cost-cutting move where the company sells McDonalds-owned outlets to a franchisee investor and receives only a cut of sales.

The shape of the results also ran contrary to recent quarters, when McDonalds and other fast food chains have focused on battling each other with dollar menus, discounts on beverages and limited-time menu items as consumer spending cools.

“It is clear that diners now see the value options as a permanent fixture and are no longer as excited or stimulated by them,” said Neil Saunders, Managing Director of market research house GlobalData Retail.

Shares of the company were down 7.9 percent this year, underperforming Dow US Restaurants index .DJUSRU, which is down just 0.7 percent.