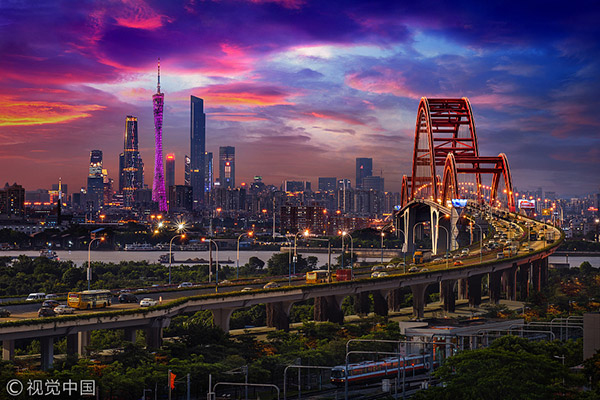 BEIJING - The Guangdong-Hong Kong-Macao Greater Bay Area has become a rising destination for talent inflow, while still having much potential for attracting global professionals, a report showed.

The region is one of the most attractive hubs for digital professionals in China, as it outperforms Beijing and Wuhan in digital talent inflow, according to a joint survey released Saturday by Tsinghua University and LinkedIn China based on the company's samples of 439,000 high-level talents and 118,000 talents working in the information and communication technology (ICT) sector in the area.

China earlier this week unveiled a development blueprint for the Guangdong-Hong Kong-Macao Greater Bay Area, aiming to turn the region into a world-class city cluster and a powerful engine for reform and opening-up.

Understanding and optimizing the human resources pattern will help propel the coordinated growth of different sectors and cities in the region, according to Wang Yanping, head of China Public Policy and Government Affairs at LinkedIn.

The Greater Bay Area has the largest proportion of high-level talents in manufacturing, consumer goods and ICT, with over 10 percent for each of the three industries, the report showed.

Technological and industrial innovation in big data, artificial intelligence, intelligent manufacturing, financial technology and other fields will become an important driving force and strategic support for developing the area, said Chen Yubo, head of the Center for Internet Development and Governance of Tsinghua University.

Shenzhen is the most appealing city both in terms of domestic and international talent flow. The tech hub is also the most magnetic city within the region.

Hong Kong enjoys a large talent pool, but its talent exchange lags far behind Shenzhen and Guangzhou while Macao lags even further behind, leaving much room for the two special administrative regions to boost talent exchange with mainland cities.

Compared with the San Francisco Bay Area and Sydney Bay Area, the Greater Bay Area shows stronger research and development capabilities but needs to catch up in entrepreneurship, according to the report.