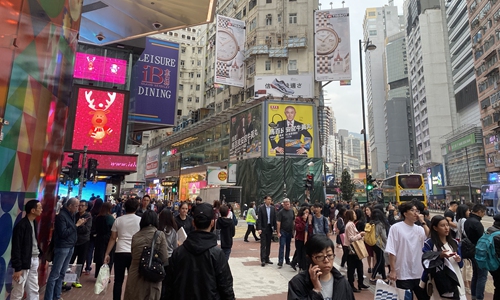 Metta Communications, the largest independent advertising agency in Hong Kong, has defied an overall downturn in the industry amid months of unrest and uncertainty in the city, benefiting from its expansion into a group of cities under a major regional initiative, a senior company executive said.

"So far this year, the company has seen about 30 percent top-line growth compared with the prior year," June Li, managing director of Metta Communications, told the Global Times in an interview over the weekend.

Li attributed the rise amid a gloomy picture to the company's expansion of its footprint to Macao and other cities in the Guangdong-Hong Kong-Macao Greater Bay Area since last year. Li said the local industry has endured hardship this year amid continued social unrest.

The chaos has dealt a blow to Hong Kong's economy, with the retail, tourism and hotel sectors among the hardest-hit, and that inevitably depresses marketing and ad spending, observers said.

Findings of a survey by the Hong Kong Retail Management Association showed earlier in December that 97 percent of surveyed local retailers had been losing money since June. Among the respondents, 30 percent said they would cut staff by 10 percent on average over the next six months if the operational climate doesn't improve or there is no support for those affected.

Based on these responses, it's possible that more than 5,600 employees, out of 270,000 working in the retail sector, would be laid off, according to the survey done between October 29 and November 22.

In a sign that social unrest has hit a widening part of the local business community, the city's top free-to-air broadcaster Television Broadcasts Ltd (TVB) revealed plans last week to lay off 350 employees, or 10 percent of its head count, citing the impact of ongoing protests on advertising and broadcasting, among other operations.

In an internal notice sent to its employees announcing the layoff decision, TVB also said it would ramp up building its footprint in the Chinese mainland, especially the Greater Bay Area, to provide its workforce new opportunities for development.

The next year would be even tougher for the ad market, subjecting more media or advertising firms to the issue of layoffs, local news portal Orange News reported on Friday.

The protests, which have affected the city for half a year, have seen signs of easing lately, although sporadic protests occurred over the weekend in some parts of the city.

The Causeway Bay retail hub, one of the hardest-hit areas in the city, seems to have regained its appeal to shoppers. One day after disruption caused by protests on Saturday at the Harbor City in touristy Tsim Sha Tsui, stores and vendors in Tsim Sha Tsui were seen busy greeting shoppers, some of whom spoke Putonghua, a Global Times reporter observed.

Still, local residents and those working in the city that the Global Times spoke with over the past few days voiced concerns over lingering uncertainty arising from protest violence.

They worry that the easing of the unrest for the time being might simply precede renewed violence at some future time.

Fears of a problematic future among the locals stands in stark contrast with optimism that has prevailed in the neighboring special administrative region (SAR) of Macao, where business leaders and local residents told the Global Times that the gaming-centric city has benefited tremendously over the past two decades from its closer ties with the mainland.

Metta's Li, for her part, based her confidence in the future of Hong Kong on the city's strong resilience. "I reckon [we] would eventually be able to emerge from the crisis," she said.

Born in Macao and raised in Hong Kong, Justin Lao, founder and CEO of K.U.G. Education and Technology, a Cantonese training institution, said the advantages of Hong Kong, which remains Asia's financial center, shouldn't be overlooked.

Hinging future growth on better integration into the Greater Bay Area, Lao told the Global Times that the mainland, Hong Kong and Macao are closely connected in terms of economic development.

As an international financial, shipping, trade and aviation hub, Hong Kong, one of the most free economies in the world, has a business environment known for its rule of law and a highly globalized commercial network, he stressed.

Macao has become increasingly known as a global tourism and leisure hub, and it has played a growing part in forging business and trade links between the nation and Portuguese-speaking countries, Lao went on to say, hoping for the two special administrative regions that are culturally close to the nine cities in South China's Guangdong Province, a big part of the Greater Bay Area, to embrace prosperity enabled by the regional push.