On September 4, the opening ceremony of the "China-Europe International Transport Corridor" natural gas-fueled car rally was held in Beijing. 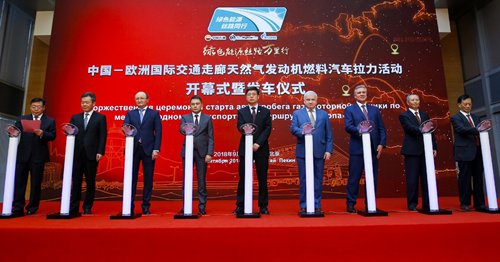 This event was jointly launched by China National Petroleum Corporation (CNPC), Russian energy producer Gazprom and KazMunayGaz, the state-owned oil and gas company of Kazakhstan. All cars in this event used liquefied natural gas as fuel.

"This project not only means a lot for the better management of oil and gas resources, but also will contribute to the economic development and air protection in the region," said Qin Weizhong, Deputy General Manager of CNPC.

"China's petrol industry will hold on to the concept of being green and open and seeking mutual benefits, and it will continue to contribute to the development of the China-Europe transport corridor," he added.