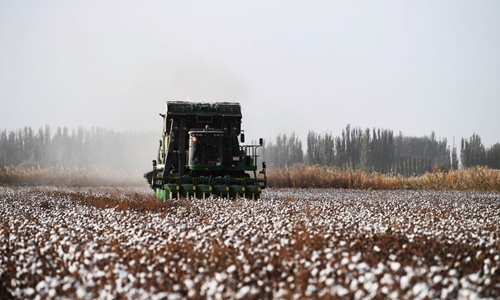 Some US organizations' call for the UK government to halt cotton imports from Northwest China's Xinjiang Uyghur Autonomous Region over fabricated rumor of forced labor is "despicable", showing that some US politicians have conspired to meddle in China's internal affairs and try to slander China, industry observers say.

The malice won't be supported by the international community, as rational UK officials and businessmen are able to draw a line between malicious political motivation and normal business activity.

More importantly, cotton grown in Xinjiang plays a vital role in the global supply chain and it is extremely difficult for companies to find any replacement.

In a letter to the UK government on Thursday, the World Uyghur Congress (WUC) and the Global Legal Action Network called on the UK government to halt imports of cotton grown in Xinjiang, claiming that there was overwhelming evidence that Uyghur people were forced to work in cotton downstream and upstream industries in Xinjiang. Chinese observers have dismissed the allegations, saying that the letter is full of lies and distortions.

"It is totally groundless. Uyghur workers come voluntarily to work at our factory. We pay social insurance for them and they take one day off per week. They're treated the same as employees from other ethnic groups," a manager of a Xinjiang-based large textile company surnamed Zhang told the Global Times.

According to Zhang, 99 percent of the company's employees are Uyghurs, with an average monthly income of 2,000 yuan ($284.6) to 3,000 yuan. These wages have helped lift dozens of Uyghur workers out of poverty.

The repetitive slander against Xinjiang has ignited a tsunami of anger among local workers and businessmen, Zhang said. According to industry insiders, because of this badmouthing, some local textile companies have lost most or all of their export orders, which results in job cuts and affects the livelihood of the Uyghur people.

"Do they really care about the well-being of Uyghurs? Those organizations are merely illegally interfering in the internal affairs of China with the ultimate goal of disrupting the fast rise of Xinjiang," Zhang stressed.

The Global Times reported earlier that the WUC, which released the report, is a US-backed right-wing organization that relies heavily on US funding and political guidance. It has long played a role in tainting China's Xinjiang policies, but virtually all of its reports have failed to gain any influence on the world stage.

Chinese analysts said that because the report was issued at a time when relations between China and the US are frayed, it cannot be ruled out that certain US politicians are using the report as fodder to complicate China's relationships with some European nations.

"The act of the WUC is like that of a despicable scoundrel and rational government leaders won't buy into it. So it is highly likely that the UK government won't take the call. Relations between China and the UK will move forward smoothly," Li Haidong, a professor at the Institute of International Relations of the China Foreign Affairs University, told the Global Times on Thursday.

The letter from the WUC also specifically identified several big-name companies such as H&M, IKEA, Uniqlo and Muji, which it claimed sell products made with Xinjiang-grown cotton. The letter suggested that they should suspend such imports.

H&M said in a statement sent to the Global Times Thursday that the firm is committed to upholding international labor standards and adopting due diligence at various parts of its supply chain - from manufacturing to the farm level.

The other three companies had not responded to interview requests from the Global Times as of press time.

An industry insider, who spoke on condition of anonymity, said that Xinjiang supplies about one-sixth of global cotton each year, which makes it impossible for foreign cotton buyers to find substitutes for the high-quality supply. More than 83 percent of China's cotton also comes from Xinjiang.

"It is up to retailers to decide on their sources of supply. This is purely an economic decision rather than serving some Western politicians' hidden ambitions," Li added.