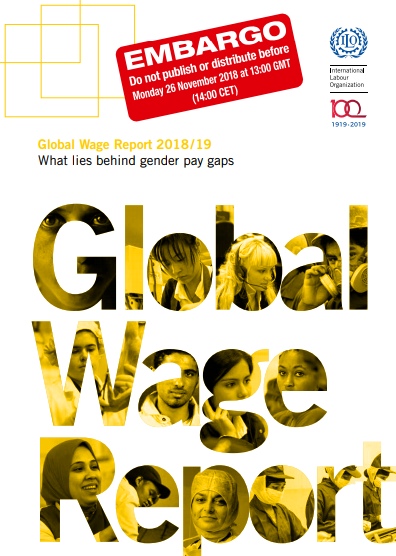 The Global Wage Report 2018/19 released Monday finds that in real terms (adjusted for price inflation) global wage growth declined to 1.8 percent in 2017 from 2.4 percent in 2016.

The report says, "While wages have increased rapidly over the past decade in some countries, most particularly in China, in many other countries average wages remain low and insufficient to adequately cover the needs of workers and their families."

The latest ILO wage report based on data from 136 countries and regions finds global wage growth has been weak while the gender pay gap, at about 20 percent globally, "remains unacceptably high," said the ILO chief.

The report says, "If China, whose large population and rapid wage growth significantly influence the global average, is excluded, global wage growth in real terms fell from 1.8 percent in 2016 to 1.1 percent in 2017."

The report observes more robust growth in average wages in low- and middle-income economies, but with much diversity across countries and regions.

Ryder described the "gender pay gap" as "one of the lasting injustices in work", which he said the ILO has been seeking to change since it started in 1919.

By contrast, in emerging and developing G20 countries, real wage growth fluctuated between 4.9 percent in 2016 and 4.3 percent in 2017.

The ILO chief said that such stagnating wages are an obstacle to economic growth and rising living standards and might explain some recent political developments in the world.