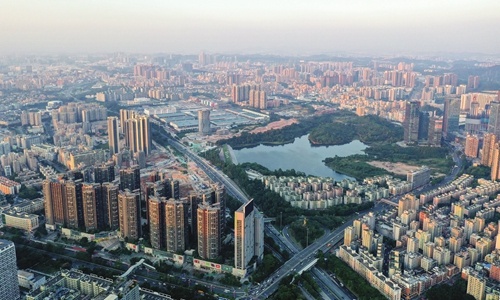 A view of the urban landscape of Shenzhen. (Photo: cnsphoto)

As the world's businesses suspend or slow operations in the face of the global pandemic and growing political uncertainty, South China's Guangdong Province - a center for global innovation, production and transportation - continues to attract international companies, thanks to the area's supportive policies, advanced supply chains and increased opening up.

Against this backdrop, Guangdong, at the forefront of China's reform and opening-up, saw actual foreign investment achieve positive growth from January to August, reaching 103.29 billion yuan, up by 0.3 percent year-on-year.

The rising investments have also been reflected in government income. From January to August, Guangdong's fiscal revenue reached 853.98 billion yuan ($126.7 billion), ranking first in the country.

Guangdong's achievements are based on its advanced supply chain and policy support, experts said.

Some experts have even predicted that regional economic performance will no longer just be about GDP, but rather the industrial chain and openness of the market, giving Guangdong a distinct advantage.

Cao Heping, professor with the School of Economics of Peking University, told the Global Times that Guangdong has been doing a solid job of being the world's production base, where many leading factories are located.

However, since the majority of the industrial chain involving advanced or new technologies remains overseas, it prevents China's domestic industrial chain from being completely closed, added Cao.

In order to tackle these issues, the Guangdong government has recently pledged to establish 20 strategic industry clusters from 2021 to 2025, aiming to advance the stability and competitiveness of industrial and supply chains and to integrate them into the global industrial and value chains.

The industry clusters will be focused on the development of several cutting-edge technologies, including semiconductors and integrated circuits, intelligent robots and blockchain and other new cutting-edge materials that are critical to the competitiveness of Chinese companies in the modern world.

Li Youhuan, a senior economist at the Guangdong Academy of Social Sciences, told the Global Times on Tuesday that a completed supply chain will enable companies to develop products from research and innovation to production and transportation at a cheaper cost and a faster pace.

"This is not empty talk but instead based on the fact that one of the world's most competitive supply chain systems is already in place in the region," Li said. Guangdong, whose economic aggregate has exceeded 10 trillion yuan, has become the landing ground of more than 50,000 high-tech enterprises.

Innovation-driven development has become the main driving force for high-quality development. China has recently issued a comprehensive plan on implementing pilot reforms to build Shenzhen into a demonstration area of socialism with Chinese characteristics in the next few years. The plan grants Shenzhen more autonomy in the reform of key areas and links.

"Shenzhen is at the forefront of economic reform, and its acuity and responsiveness are very fast. The region fosters many ten-billion dollar cross-border e-commerce businesses, thanks to the advanced supply chain in place," explained Hong Shibin, a senior analyst in manufacturing production supply chains.

"Enterprises need not leave the Pearl River Delta to complete a product portfolio, because there are a variety of manufacturers for their parts, which gives Guangdong a unique advantage," said Hong.

With rising uncertainty in global trade and the ongoing pandemic outbreak, the region is now speeding up advancements in, among others, the semiconductor and integrated circuit sectors, which have been at a disadvantage under recent US crackdowns, Hong said.

Cao believes that local governments may also be given more rights to allocate resources, such as land approvals, in the future to boost growth.

Shenzhen's comprehensive pilot reform and the "dual circulation" strategy will bring great benefits to Guangdong, and the existing industries will usher in great development under the guidance of the policy, experts said.

In future, Shenzhen's position at the center of international finance and digital information technology may well transform it into a leading city in the development of the Guangdong-Hong Kong-Macao Greater Bay Area, and Hong Kong and Guangzhou will find their development benefits from healthy competition between the two, analysts said.