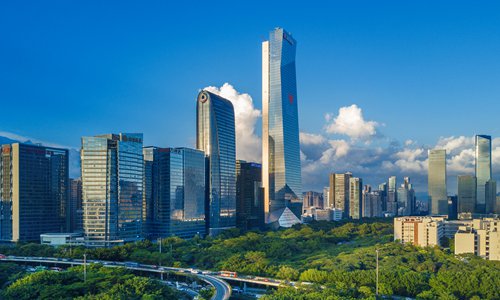 The fast-rising technology hub of Shenzhen, South China's Guangdong Province, will attract more young entrepreneurs from the Hong Kong Special Administrative Region (HKSAR) under a central government plan to make the city a demonstration area of socialism with Chinese characteristics, Hong Kong entrepreneurs who do business in Shenzhen told the Global Times.

Technological cooperation between the two neighboring cities will also alleviate problems in Hong Kong amid ongoing protests, which have caused social unrest and economic chaos in the international financial center, the entrepreneurs said.

Under Beijing's guidelines released on August 18, Shenzhen is intended to become a world-class metropolis in economic and development terms by 2035.

Hong Kong and Macao residents who work in Shenzhen will be treated as local residents for the purposes of social welfare programs.

The Greater Bay Area, encompassing Hong Kong, Macao and nine cities in the Chinese mainland including Shenzhen, is a central government plan to make the region an innovation and financial powerhouse that rivals Silicon Valley and the Tokyo Bay Area.

Hong Kong entrepreneurs said that Shenzhen, which hosts the headquarters of technology giants such as Tencent and Huawei, has many incubators that provide comprehensive services for entrepreneurs. Hong Kong, by comparison, has few such facilities and they're not as attractive.

"When I worked in Shenzhen's incubator, the air conditioners were on 24 hours a day. But Hong Kong's incubators shut down the air conditioners at 7pm. How could I do research and development when it's hotter than 30 degrees? Maybe I should take my team back to my 27-square-meter apartment?" asked Henry Yau, a Hong Kong resident who founded the intelligent lighting company Everbright Technology Development in the Qianhai Dream Factory in Shenzhen in 2016.

Yau said that he expanded his business from Hong Kong to Shenzhen because of the latter's reputation as a global electronics manufacturing base.

"Shenzhen has a cluster of electronic processing facilities that is just like its local night seafood market - in either place, you can pick and choose whatever you want. Anyone in the electronics industry will be attracted to the city," Yau told the Global Times on Thursday.

That convenience has sped up the production cycle, which Yau said can be up to four times faster than in Silicon Valley, which is now one of the world's innovation centers for the high-technology industry.

Yau said that he completed the production cycle of an intelligent lighting product in Shenzhen in record time. It took only five days to go from raw material assembling to testing and putting the product on the market to applying for patents.

With that kind of convenience and efficiency, the economy of Shenzhen, which sits across the border from Hong Kong, has skyrocketed over the past years. Shenzhen's GDP surpassed that Hong Kong for the first time last year, standing at 2.42 trillion yuan ($361.24 billion).

Now, Yau's Hong Kong office specializes in research and development, while the Shenzhen branch focuses on translating research findings into market-ready products and promoting them.

This division mirrors the comparative advantages of both cities: Hong Kong excels in innovation, while Shenzhen is strong in market applications and exploration, industry insiders said.

"We have set up a sales department and we hope Shenzhen will be our beachhead to make a foray into the massive mainland market. We also hope to hitch a ride on the Belt and Road Initiative to expand abroad," Yau said.

For example, apartments in Hong Kong are tiny and expensive - often, even costlier than New York or London, and there's pressure in the job market. But as it develops, Shenzhen can offer Hong Kong people more scope for professional and personal development.

Shenzhen's increasingly open policies and "citizen treatment" for Hong Kong people will alleviate their concerns about re-settling in the mainland city, according to Tsang.

But despite the rapid development that's made it a hot spot for start-ups, Shenzhen still has much to do in terms of attracting international talent, including people from Hong Kong.

"The maximum personal income tax in Hong Kong is 16 percent, while in the mainland it is 30 percent, so Hong Kongers may take home less money in Shenzhen even if their pre-tax incomes are higher," Yau said.

He also said that as more foreign nationals, including those with children, are expected to live in the city, Shenzhen should open more affordable educational institutions for foreign children.