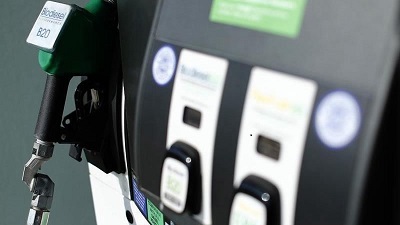 Gutter oil typically sparks revolting images of squalid restaurants or grease traps.  But now the notorious substance is opening up the imagination for greener possibilities, as it becomes recycled into biofuel that is making its way into gas stations and powering clean vehicles.

Twenty sanitary vehicles tanked up on recycled gutter oil at a Sinopec gas station in Shanghai on Tuesday, a milestone in recycled waste fuel entering the energy market in China.

The gas station in Fengxian District has two biodiesel oil tanks, selling the biofuel at 5.72 yuan (0.86 U.S. dollars) per liter, while at an adjacent pump, standard diesel sells for 6.02 yuan.

The oil company said another gas station in Pudong District is also preparing to begin vending the cleaner fuel.

The city government has designated Shanghai Zhongqi Environment Technology Co. Ltd to dispose of the city's leftover cooking oil and turn it into biodiesel. The recovery process is closely monitored and trucks with special licenses for transporting gutter oil are equipped with GPS devices.