"I no longer purchase brands like Nike and Adidas which stated they do not source cotton from Northwest China's Xinjiang Uygur Autonomous Region," a Beijing resident surnamed Liu told the Global Times on Tuesday. 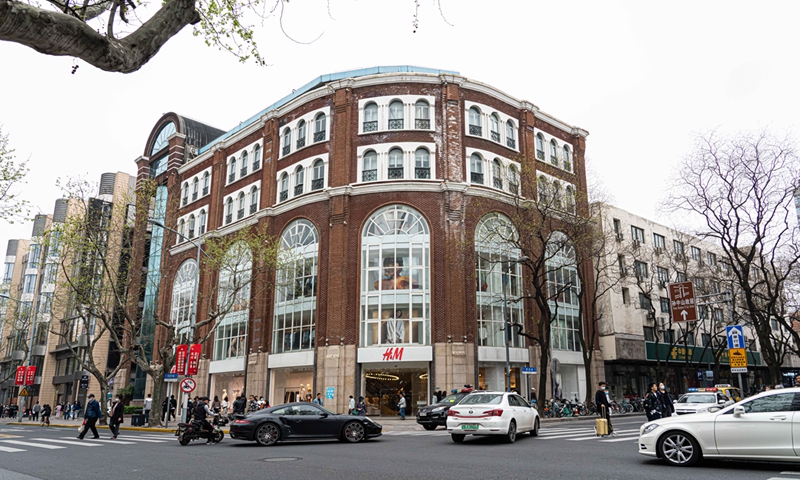 Liu noted that she used to adore sportswear from Adidas, but now she has switched to domestic brands and other international clothing lines.

Another Beijing-based white-collar worker surnamed Wang said that "switching to brands that support Xinjiang cotton is just as easy as snapping one's fingers," stressing that the market now has a wide range of alternatives for brands like H&M with even better quality, especially with the rise of domestic clothing brands.

The landscape of China's apparel market has been completely reshaped with the "halo" hovering on international brands like Adidas and Nike quickly dissipating, who now face closing stores and stagnant revenue.

H&M shut down its first flagship store in Shanghai last week, the Wall Street Journal reported on June 24, citing a representative on its customer-service hotline. The three-story shop located on Huaihai Road in downtown Shanghai opened 15 years ago which was also its first store in China.

The consumer boycott of some Western brands over their opposition to source Xinjiang cotton is just a small part leading to their failure in the Chinese market. Analysts noted that the major cause is a lack of competitiveness while unable to retain their market share amid the emergence of domestic rivals.

According to the Wall Street Journal report, H&M currently has 362 stores in China, down from 445 in November 2021 and 505 a year earlier.

In addition to H&M, Nike has also witnessed a decline in the Greater China region over the past fiscal year according to the company's latest financial report released on Monday.

As for Adidas, revenues in Greater China decreased 35 percent in the first quarter of the year due to a continuous challenging market environment which was amplified by COVID-19 lockdowns, the company said in its quarterly financial report released on May 6.

Meanwhile, the company also noted that its outlook for gross margin in fiscal year 2022 has been lowered to 50.7 percent of the prior year's level from the previous range between 51.5 percent and 52.0 percent because of the less favorable market mix resulted by the lower-than-expected revenues in Greater China.

Overseas brands have lost prestige among Chinese consumers who have opted to support Chinese products on the back of a new wave of patriotism. While the support has helped shift the market, the competitive landscape has been further reshaped as Chinese brands are quickly catching up in their product design, marketing strategy, and quality.

"The quality of domestic apparel brands now is not inferior to overseas brands," Zhang Yi, CEO of iiMedia Research Institute, told the Global Times on Tuesday.

Zhang noted that production lines for some overseas brands are located in China or in Southeast Asia with a manufacturing cost less than 50 yuan ($7.49) for products which may retail for around 600 to 700 yuan.

Given comparable product quality, domestic brands usually offer a more affordable price point closer to 200 to 300 yuan, Zhang noted, adding that it is of course more appealing to Chinese consumers.

At the same time, Chinese brands have been ramping up efforts and investment in promotions compared with some Western brands, while integrating their marketing strategies with advanced digital technologies and expansion in e-commerce channels to effectively connect with their consumers, Zhang said.

Chinese domestic sports brand Li-Ning posted a nearly 30 percent year-on-year increase in retail sell-through in the first quarter of 2022, with the same-store-sales for the overall platform registered a more than 20 percent increase on a yearly basis, the company revealed in April.

Another leading domestic sports brand Anta Sports also recorded a nearly 20 percent increase in its retail sales performance for the first quarter, while the company's other branded products posted growth of 40-45 percent, the company said in a statement on April 14.

Analysts also reminded multinational corporations to make their strategic moves in China wisely and not to be fooled by false information as China currently offers a top-tier business environment and favorable policies for foreign investment despite the impact of COVID-19 flare-ups.

"China's epidemic control and business environment currently is leading the world," Dong Dengxin, director of the Finance and Securities Institute of the Wuhan University of Science and Technology, told the Global Times on Tuesday.

Dong added that almost all foreign enterprises in China are able to benefit from favorable policies which are not common among other countries, while enjoying the same preferential policies with Chinese companies such as tax reduction.

For instance, Shanghai has been implementing a wide range of measures to stabilize foreign investment and optimize the business environment.

The measures include facilitating cargo throughput at Customs, supporting online certificate processing and establishing green channels for key enterprise, coordinating conferences with foreign enterprise executives and government officials, while financial support and funds to be granted to encourage the development of regional headquarters of multinational corporations in Shanghai will be allocated by end of September.