China's steel output maintained stable growth in the first half, driven by rising market demand, an industry body said on Monday. An expert noted that despite pressure persisting in supply and demand in the domestic sector, prospects are sound thanks to the government's efforts to ensure market stability and promote the systemic improvement of production capacity. 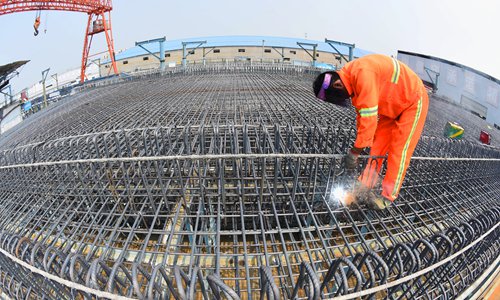 A worker welds steel bars at the construction site of the Xuzhou-Lianyungang High-speed Railway in Lianyungang, East China's Jiangsu Province on Sunday. The line is expected to be open to traffic by December next year. (Photo: VCG)

The China Steel Price Index fluctuated around 110 points in the first half and the average index was 109.48 points, down 3.6 percent year-on-year, the CISA said.

With continuous investment in basic construction in China, demand for steel kept rising and domestic producers met the demand as part of the national economy's development, He said.

Despite rising demand, fast expansion of steel output may put pressure on the balance between supply and demand, Wang Guoqing, research director at the Beijing Lange Steel Information Research Center, told the Global Times on Monday.

In a bid to tackle that pressure, relevant departments are expected to regulate illegal production and operation of steel capacity and more restrictions are likely to be unveiled to cut overcapacity.

Wang forecast that the domestic steel industry will continue to see stable growth in the third quarter as local governments have rolled out measures to secure qualified capacity. China has adopted practical measures to reduce steel capacity in recent years.

China has adopted practical measures to reduce steel capacity in recent years. Since 2016, China has cut crude steel capacity by more than 150 million tons, according to the Xinhua News Agency.

In 2019, the Chinese government will focus on structural capacity cuts and promote the systemic improvement of production capacity, the report said.

China's steel industry developed smoothly and the capacity utilization rate remained in a reasonable scope, Meng Wei, spokesperson with the National Development and Reform Commission (NDRC), told a press conference on May 17.

The NDRC will pay close attention to the overall operation of the domestic iron and steel industry and strengthen efforts to cut excess capacity and crack down on illegal capacity, Meng said.

Steel enterprises generated 2.1 trillion yuan ($305 billion) in revenue in the first half of this year, an increase of 10.9 percent year-on-year, but their net profit slumped 20.5 percent to 106.5 billion yuan, according to the CISA.