Hainan Airlines, one of largest aircraft operators in China, stopped using the Boeing 767-300ER on Sunday, after 16 years' intercontinental flying of the aircraft.

The last flight was from Phuket, Thailand to Beijing. 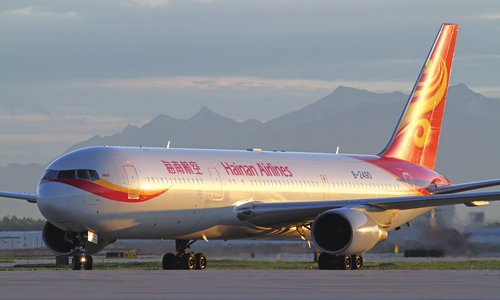 Hainan Airlines operated three Boeing 767 aircraft. The first was delivered in November 2002, making the beginning of the wide-body aircraft for the carrier.

In August 2004, the Boeing 767-300ER flew from Beijing to Budapest, Hungary, the first trans-continental route for the company. The Boeing 767 fleet has served more international destinations such as Brussels, St. Petersburg and Dubai.

The planes are being retired because of high operating costs, especially for labor, training and maintenance, Qin Ling, an industry insider, told the Global Times.

With more international routes having been opened, the carrier is using more modern aircraft such as the Boeing 787, which can totally replace the Boeing 767 in terms of flying distance and performance, he added.

Hainan Airlines has a fleet of more than 400 aircraft, most of which are relatively young planes in the Boeing 737 and 787 series and the Airbus 330 series.