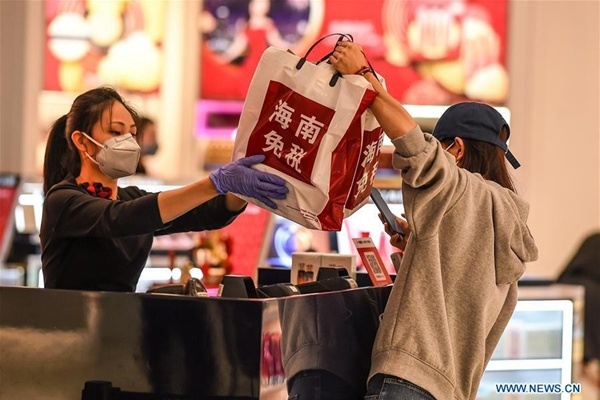 A customer pays her bill in a duty-free shop in Haikou, south China's Hainan province, on Feb. 20, 2020. (Photo: Xinhua)

The master plan aims to build Hainan, China's largest special economic zone, into a globally influential high-level FTP by the middle of the century, and make the southern, tropical island province the frontline of China's integration into the global economic system.

"To build the Hainan FTP is unprecedented for both China and worldwide," said Zhang Jianping, a senior researcher at the Chinese Academy of International Trade and Economic Cooperation at China's Ministry of Commerce.

To enable the free flow of trade, the island province will introduce measures that center on zero tariffs for the trade of goods, while facilitating both entry and business operation of service providers.

Market entry will be markedly widened for investments in an open, transparent, and predictable environment, featuring strengthened intellectual property protection and market fairness, according to the plan.

Zhang said the degree of openness in trade is "unprecedented," and that the world has never had a FTP with an area as big as the entire Hainan province. He said the FTP will operate based on China's socialist market economy system.

"A new round of active opening up is required as the Chinese economy turns from export-driven to innovation-driven," Zhang said, adding that the country is also transitioning its focus in trade from quantity to quality, hence the necessity for leading platforms with innovative systems and policies like Hainan FTP.

Looking at the bigger picture, Zhang said that the building of Hainan FTP would help to improve global value and supply chains, and contribute to global economic growth by boosting the development of China and the Asia-Pacific Region.

Wang Haifeng, director of international trade and investment of the Chinese Academy of Macroeconomic Research, also spoke to China.org.cn about Hainan FTP from a global perspective. He said this move offers many opportunities to global companies and conveys a strong message to the international community: "China's reform and opening up will only go increasingly forward, and the door of opening up will only grow increasingly wider."

And the global business community is taking notice. According to official data, 338 foreign-funded enterprises were set up in Hainan in 2019, and the actual use of foreign capital reached US$1.5 billion. Both numbers doubled from the previous year.

Wang said the trinity of institutional innovations, laws, and preferential policies differentiate the planned opening up in Hainan from free trade zones that were established in China earlier, and that the master plan "started a new journey of China's reform and opening up."

He said that after making quantitative changes during years of explorations in free trade areas, China has now started to make qualitative changes. A pilot period for Hainan's free trade area began as early as April 2018, and policymakers have gradually explored and steadily promoted the establishment of the FTP.

According to the master plan, the FTP will adopt a modern industrial system that enables a smooth flow of key production factors, supported by tailored taxation mechanisms, efficient social governance, and the rule of law.

Hainan will also be given more autonomy in reform and encouraged to make both the laws and the regulatory system more flexible and efficient, thus clearing institutional obstacles hampering the flow of production factors. The rules and regulations will be made to align with international norms, according to the plan.

China's top leadership has underlined the importance of high-quality and high-standard construction of Hainan FTP, while prioritizing innovative institutional integration in the process of building the FTP. Chinese Vice Premier Han Zheng, who heads a leading group on deepening all-round reform and opening up in Hainan, chaired a meeting of the group on May 31 in Haikou, the capital city of Hainan province.

Wang said arrangements like the leading group have shown the central government's resolve, and that he has confidence in the construction of the FTP despite difficult tasks ahead in terms of implementation. He suggested drawing on experience from world-famous FTPs like Singapore and Hong Kong.