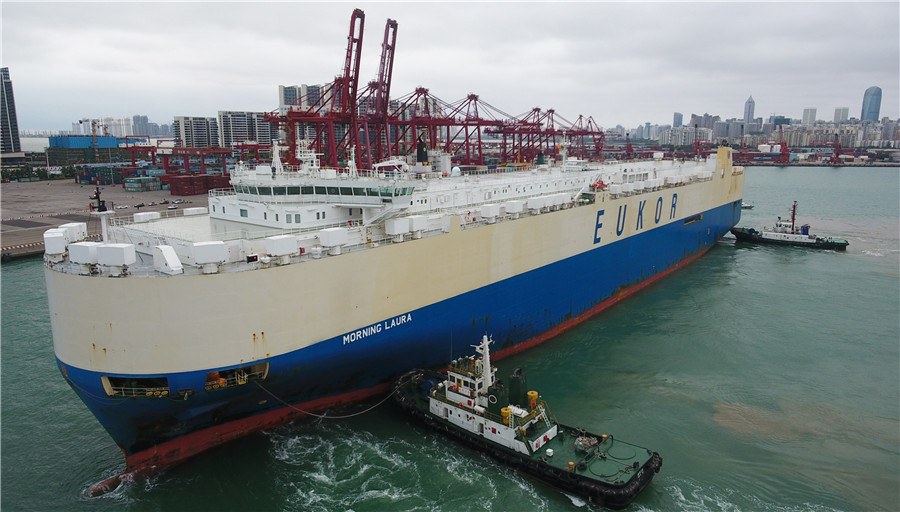 A cargo ship from Qatar docks at a port in Haikou, capital of Hainan province, on Feb 16. (Photo: Xinhua)

Editor's Note: 2020 is the year Hainan province initiates construction of the China (Hainan) Free Trade Port, a major national strategy promoted by President Xi Jinping in 2018. China Daily is running a special page to review the progress made by the China (Hainan) Pilot Free Trade Zone over the past two years.

Work at construction sites in the Haikou Jiangdong New District, a new 298-square-kilometer benchmark area to promote construction of the China (Hainan) Free Trade Port, has been continuing apace, even under the challenges posed by the COVID-19 outbreak.

Xu Jinhong, a company manager who has participated in many highway projects and has been at the new district for more than a year, said: "The construction speed of road networks in Jiangdong is one of the fastest in China. You see changes month by month and Jiangdong has taken on a brand-new look in only half a year."

Similar busy scenes, which demonstrate Hainan's efforts to catch up with the goals set by the central authorities to engineer the country's comprehensive and in-depth reform and opening-up drive, are also common in other cities and counties across Hainan, China's 12th and largest free trade zone with a geographic size about 32 times that of Hong Kong.

Hainan has made solid progress in developing a legal system and convenient business environment that matches world-class norms over the past two years, and a new pattern of comprehensive opening-up is substantially ready to launch construction of the nation's free trade port, according to provincial government officials.

At a gathering to mark the 30th anniversary of the establishment of Hainan province and the Hainan Special Economic Zone in Haikou, the provincial capital, on April 13, 2018, President Xi Jinping announced China's plan to build the whole of Hainan Island into a pilot international free-trade zone and gradually explore building a free-trade port with Chinese characteristics. Xi said it was a major decision that underlines China's commitment to expanding opening-up and promoting economic globalization.

The State Council, China's Cabinet, issued the General Plan for China (Hainan) Pilot Free Trade Zone on Oct 16 of that year, introducing a series of new policies to encourage overseas investment in the Hainan FTZ to promote high-standard and high-quality reform and opening-up.