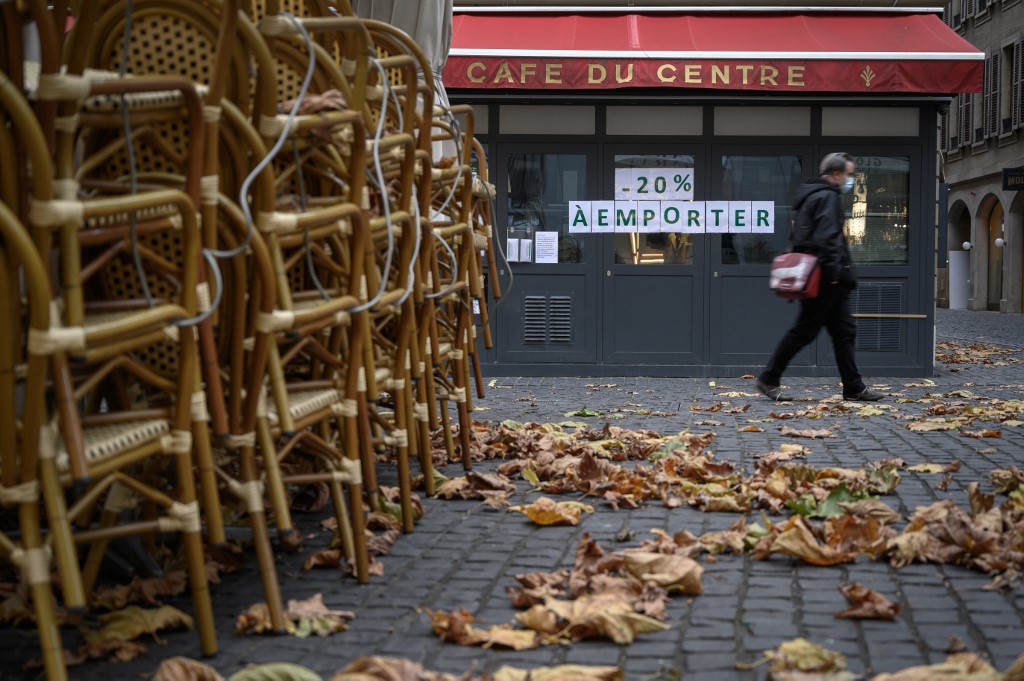 This photograph taken on November 4, 2020 shows a pedestrian, wearing a protective face mask, walking past a restaurant next to a pile of chairs tied together during a semi-lockdown in Geneva. (File photo: AFP)

The Swiss government is expected this week to extend the closure of bars, restaurants and leisure facilities across the country until the end of February to control stubbornly high Coronavirus case and death numbers.

But industry federation GastroSuisse warned in a statement that if done without providing significant financial support, around half of businesses in the restauration and hospitality sector could go belly-up by the end of March.

The group polled around 4,000 restaurant and hotel owners, and determined that 98 percent of them already are in urgent need of financial support.

"The very existence of many of them is threatened," GastroSuisse president Casimir Platzer said in the statement.

While restaurants and other businesses quickly received financial support when Switzerland went into partial lockdown during the initial wave of infections, GastroSuisse has complained that support during subsequent sporadic closures has lagged.

Before the crisis, more than 80 percent of Swiss restaurants and hotels were in a good or very good position of liquidity, the study showed.

But that situation quickly deteriorated.

In October, as a second wave of infections picked up steam, the organisation cautioned that 100,000 jobs were at risk.

And during the final two months of 2020, nearly 60 percent of restaurant and hotel establishments were forced to conduct layoffs for a second time, it said.

Without government intervention, a third wave of layoffs is looming, Platzer warned.

The latest closures were to be lifted on January 22, but the government said last week it wanted to extend the deadline for a further five weeks.

GastroSuisse said the final announcement, due Wednesday, needed to be accompanied by "immediate and uncomplicated" financial support to the sector to avoid "disaster".

USAM, a union that represents small and medium-sized businesses in Switzerland, called Sunday for the government not to prolong or tighten measures, warning it was an "existential question" for many of its members.

Switzerland, a country of 8.6 million people, is currently registering around 4,000 Covid-19 cases a day and had by Friday seen nearly 476,000 cases and 7,545 deaths since the start of the pandemic.