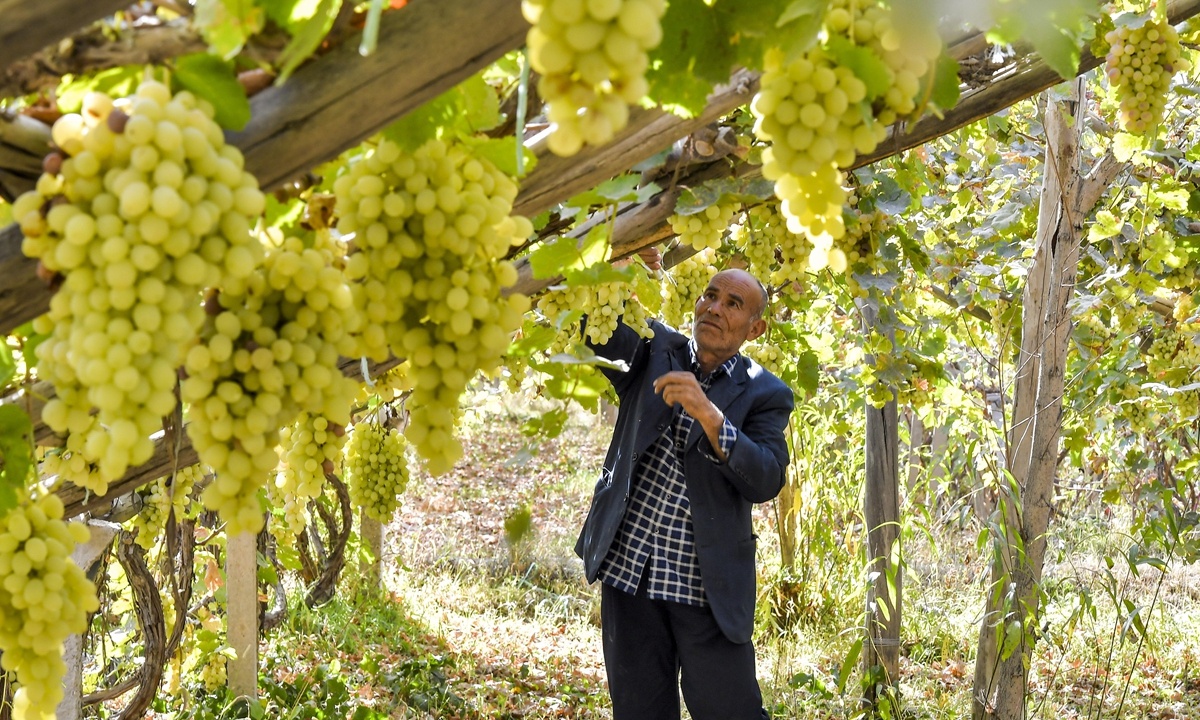 A resident in Artux City in Northwest China's Xinjiang Uygur Autonomous Region checks the ripeness of grapes in his vineyard. Photo: cnsphoto

Tian Wei may lack confidence in speaking the Uygur language, but seems confident when it comes to planting figs together with his Uygur employees in Northwest China's Xinjiang Uygur Autonomous Region.

"If we picked figs this morning, consumers in Beijing can eat them tomorrow night, with an increasingly robust air transport network," Tian told the Global Times. Several years ago, Tian invested in fig planting bases in the countryside around Beijing, more than 4,000 kilometers away from Pishan county under the administration of Hotan Prefecture, which is now the new starting point for his fig planting career.

One may wonder why Tian came to Hotan to establish fig planting bases. The reason is simple: fig trees love a hot, dry climate, so are ideal for most parts of Hotan. "The price of figs grown here is twice that of Beijing partly due to higher sweetness," Tian said.

The project now has 62 employees, many of whom are Uygur. Their average monthly income is thousands of yuan. Some of them were still living below the poverty line several years ago, so the income is very helpful in improving their living standards.

For historical and a range of natural reasons, Xinjiang has long lagged behind other parts of China in economic development, and there is a large impoverished population.

In recent years, Xinjiang in China's far west has become a magnet for investors like Tian. Some are attracted by the region's rich natural resources and relatively affordable labor forces, while others are lured by local governments' preferential policies for investors. In the first half of this year, investment in fixed assets climbed 28.6 percent year-on-year in Xinjiang, despite the impact of COVID-19.

In the factory of Tianshan Xiaoge Agriculture and Technology Company, the carefully selected chickpeas come out from a color selector and are later ground into fragrant powder by another machine.

The company was established in June 2019 in Toli county, Tacheng Prefecture, Xinjiang. It mainly produces three types of products based on chickpeas and its capacity could reach 5,000 tons annually, Li Wei, the company's manager, told the Global Times.

On November 1, 2017, the Toli county shook off poverty. To improve local residents' lives, the Urumqi-headquartered company decided to set up a factory in the county, Li said. According to the manager, so far, the factory has provided employment to 22 locals, including 12 from poor households. At the same time, it also helped increase the income of thousands of farmer households.

In the factory, Yerdana, a 29-year-old Kazak, expressed his gratitude for the job opportunity.  Yerdana used to be a shepherd owning eight cows and 20 sheep. He told the Global Times that he could earn less than 1,000 yuan ($147) per month at that time, but after joining this factory, his life has become much better.

"I have over 50 sheep and 13 cows. My two children are studying at school in the county," he said with great excitement.

Walking into the front gate, one can see a red banner hung prominently on the factory's building, which reads "explore new ways for shaking off poverty, guide farmers to live a better life."

In southern Xinjiang, where the Uygur ethnic group accounts for about 80 percent of the population, increased investment is also bringing new job opportunities. Mutalifu, a 24-year-old Uygur worker, told the Global Times that he is very satisfied with his current job in an animal husbandry firm in Yutian county, Hotan Prefecture.

After graduating from junior high school, he had no stable job and sustainable income. "I'm very lucky to find a job in the factory with a salary of 2,500 yuan per month," he said with a satisfied smile. The job offers him not only a stable income, but also a chance to learn techniques to raise sheep. The young man wants to raise more sheep by himself one day after he learns the skills and earns more money.

In 2018, the husbandry firm established a regional sheep breeding base in Yutian with an investment of 120 million yuan. The breeding base has provided stable jobs for 43 local workers, among them 35 lived below the poverty line before getting the job. The Global Times learned that their average monthly income is more than 2,000 yuan. 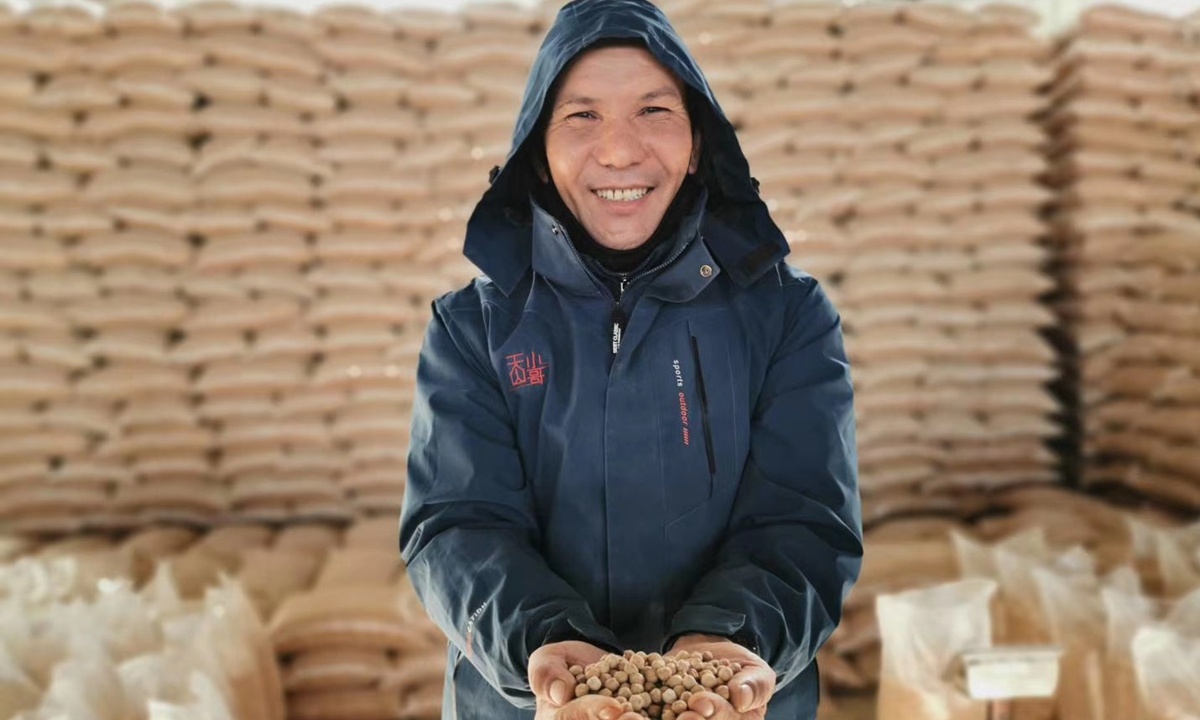 By working together, Uygur and Han employees form deep connections. This kind of integration has penetrated nearly every corner of society with economic development serving as the driving force behind it. Ayixianmu, a middle-aged Uygur woman who is manager of an ethnic-food restaurant in Aksu Prefecture, told the Global Times that staff working in the restaurant have to learn how to speak Putonghua, because more than half of the consumers are Han Chinese.

Wangsan Street where the restaurant is located is a famous commercial street in the city of Aksu. Nearly all of the people working here are from ethnic minority groups. After a decline in operating incomes, merchants on the street drew up measures to attract Han tourists, helping the commercial street emerge from recession.

In recent years, Xinjiang has attracted a large number of investment projects and tourists from outside the region. Economic development has brought employment opportunities for local Uygur people, and has also promoted Uygur and Han bonding.