French luxury goods maker Hermes said Wednesday it notched up record sales in 2019, driven primarily on the back of strong demand in Asia, but it was too early to assess the economic impact of the coronavirus on its business. 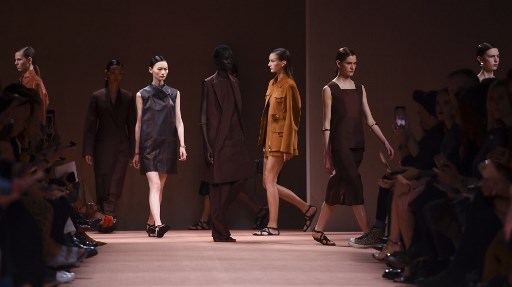 Models present a creation by Hermes during the Women's Spring-Summer 2020 Ready-to-Wear collection fashion show at the Tennis Club de Paris, in Paris, on September 28, 2019. (Photo: AFP)

"Hermes achieved outstanding performances... based on a balanced growth in all the business lines and in all the geographical areas," said chief executive Axel Dumas.

However, it was "still too early to draw any conclusions" about the impact of the coronavirus, Dumas said.

The Asia-Pacific region accounts for more than half of Hermes' annual sales.

"This has happened in an important country and at an important time of the year," namely the Chinese new year, the CEO said.

"We're seeing a potential normalisation but it's too early to know when business will start to rebound," he said.

No Hermes employee had so far been taken ill, and the group had not so far experienced any supply problems.

"Around 80 percent of our production is in France," Dumas said.

Looking ahead, Hermes said that "in the medium term, despite economic, geopolitical and monetary uncertainties around the world, the group confirms an ambitious goal for revenue growth at constant exchange rates."