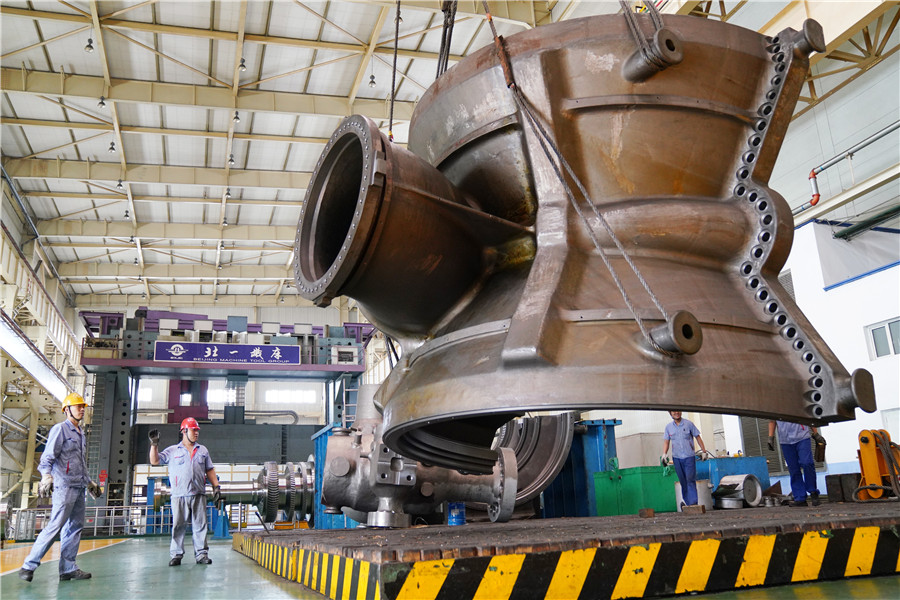 Employees work on the production line of a turbine manufacturing plant in Harbin, capital of Heilongjiang province. (Photo: Xinhua)

High-end manufacturing must be integrated into the development of city clusters, regional linkages and digital innovation, as well as the Belt and Road Initiative for China to achieve breakthroughs in fields that it has been lagging, a leading economist said.

As high-end intelligent equipment, new generation of information technology, new materials, new energy vehicles and other emerging industries are highly sought after in many parts of the world, regional development of the Guangdong-Hong Kong-Macao Greater Bay Area, Yangtze River Delta city and Beijing-Tianjin-Hebei city clusters will help create a number of leading cities supported by the agglomeration of industries in surrounding areas.

To give full play to China's existing innovation advantages, Wei urged the country to further upgrade its manufacturing industry via digital technology, because it is economically beneficial to combine digital technology with the contemporary industrial system to raise the added value of industrial products.

"Artificial intelligence and big data analysis can efficiently boost the matching degree between consumers' diversified preferences and manufacturers' production capacity, so as to build a better industrial chain, supply chain and value chain supported by digital solutions," he said.

The added value of China's high-tech manufacturing grew 6.1 percent year-on-year in August, 1.7 percentage points higher than that of all industrial enterprises above the designated size, according to data released by the National Bureau of Statistics last week.

Facing the threat of protectionism, Wei noted that China should take advantage of the Belt and Road Initiative opportunities to better support its manufacturing sector, as the trade friction between China and the United States has pushed a number of domestic and global companies to relocate their factories in India, Vietnam and other countries.

"We should combine industrial transfer with the BRI development together, and enlarge the formation of new advantages that complement each other in the outward transfer of industries and the domestic industrial upgrading," said Wei, who also was China's vice-minister of commerce between 2003 and 2008.

"It will gradually promote orderly "going global" progress for home companies, diversify their origin, export markets and asset portfolios, and break down the tariff barriers set by the US," he said, adding this can be a practical measure to address issues such as industrial relocation, overcapacity and the China-US trade dispute.

Chen Xuedong, an academician at the Chinese Academy of Engineering, said globalization is a positive trend of the global economy. It brings new opportunities to everywhere in the world and improves international partnerships. Every country, company and individual has benefited from globalization, he said.

China has also taken a series of measures to open up further, including expanding the range of areas open to foreign investment and optimizing foreign investment rules. This helps boost the confidence of foreign companies too, he said at a sub-forum of the 2019 World Manufacturing Convention held in Hefei, capital of Anhui province, late last month.