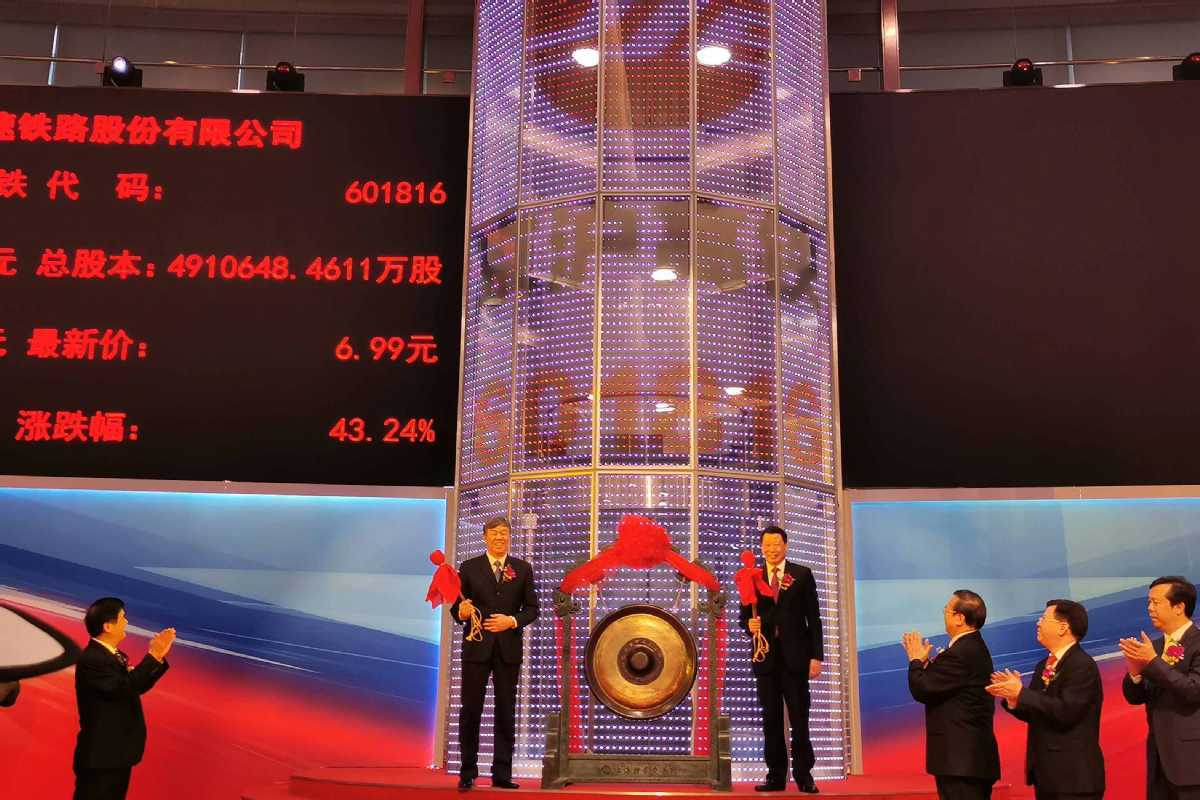 Beijing-Shanghai High Speed Railway Co Ltd, the operator of the high-speed railway linking the two most developed cities of China, saw its shares rising by 43.24 percent to 6.99 yuan ($1.02) on debut before closing at 6.77 yuan on Thursday, up 38.73 percent from its initial public offer price of 4.88 yuan.

The strong debut signaled investors' confidence in the State-owned railway operator, as it owns China's most lucrative high-speed rail network, and has been deepening reforms to enhance performance and operation efficiency, analysts said.

MSCI Inc, the world's largest index provider, said on Thursday that it would include the company's shares in two of the indexes for China's stocks, starting Feb 6.

Ping An Asset Management Co, the representative of an insurance fund consortium, said it remains confident on the high-speed railway's growth, and will hold the company shares for the long term.

The company's 1,318-kilometer railway line between Beijing and Shanghai, which started operations in 2011, is the world's longest high-speed railway line constructed in a single phase with highest quality standards, and covers 66 counties of seven provinces and municipalities in two of China's most densely-populated and busy economic areas－Beijing-Tianjin-Hebei and Yangtze River Delta regions.

"The company's performance on its first trading day was not a surprise, with its promising profitability and its inherent advantage as a State-owned company and its huge customer base," said Dong Dengxin, director of the Wuhan University of Science and Technology's Finance and Securities Institute.

"The main significance of the company's listing is not just raising funds, but the fact that it sets an example for a State-owned railway company to use the capital market to deepen reforms and enhance operations."

Once listed and subject to capital market rules, the company will become more transparent and regulated in its operations and management and could use the IPO proceeds and capital market tools to better implement its strategic plans to expand, including mergers and acquisitions, he said.

That means, the company's operation and management efficiency will be enhanced, and it will accumulate experiences for the State-owned asset owners to leverage on the capital market to bring in diversified investors, to strategically manage industry resource allocation, and to improve the optimal distribution of State-owned capital and the operational efficiency, he said.

The company got approval for an IPO from the China Securities Regulatory Commission on Nov 14, after submitting a request on Oct 22.

It raised 30.7 billion yuan by selling 6.29 billion shares at 4.88 yuan apiece and had a price-to-earnings ratio of 23.39 times, above the current cap of 23 times for the first time in new shares issuance.