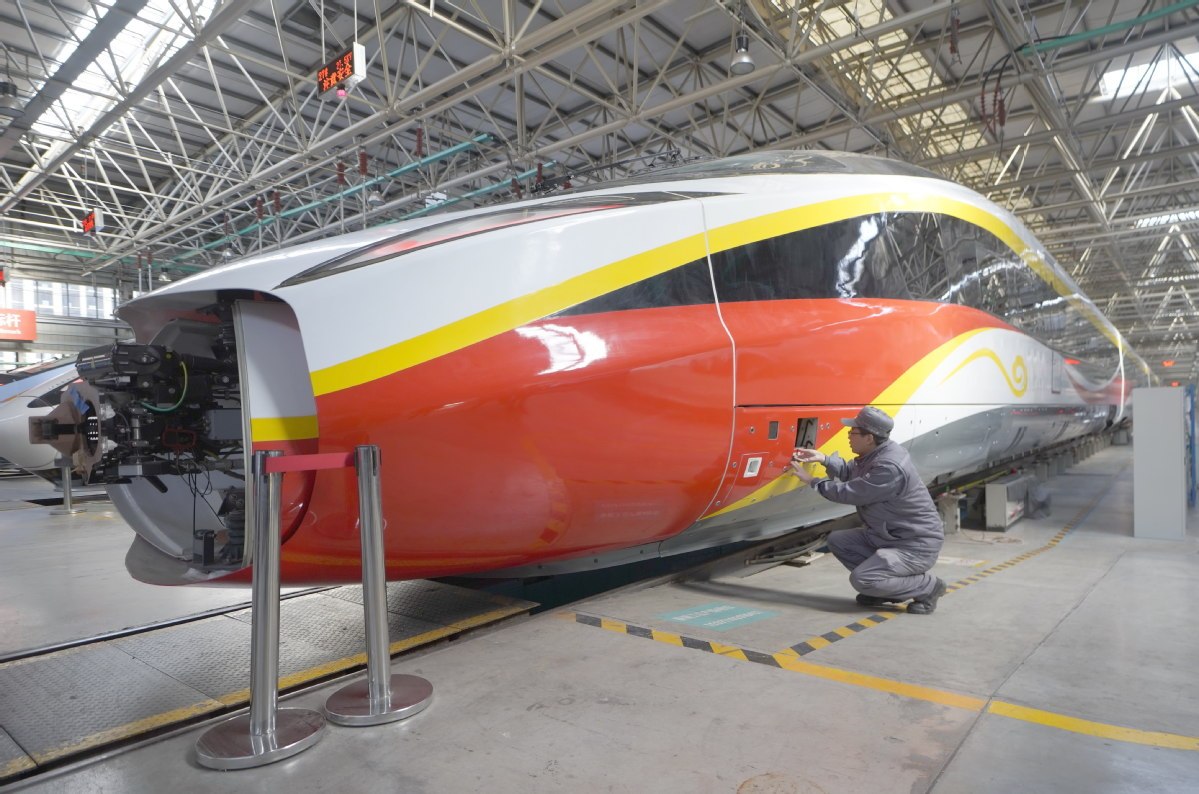 A CRRC Tangshan employee examines a high-speed train at a facility in Tangshan, Hebei province, on Dec 4. (Photo: Xinhua)

With China planning to build new railways and export more high-end manufactured products during its 14th Five-Year Plan period (2021-25), CRRC Tangshan Co Ltd, a Hebei province-based high-speed train maker, said it is ready to take orders for customized trains in line with the technical standards and operational requirements in different parts of the world.

After supplying maglev trains with a top speed of 120 kilometers per hour for a line in Qingyuan, Guangdong province, 60 passenger coaches to Nigeria and 10 diesel multiple unit (DMU) trains to Angola over the past two years, CRRC Tangshan has now rolled out a 400 km/h high-speed train at its production line in late October.

In addition to CRRC Tangshan's operations that focus on Europe and certain parts of Asia, CRRC's other operations in Qingdao, Shandong province, and Changchun, Jilin province, have also been carrying out research and development on new trains targeting the needs of Russia and Southeast Asian markets.

Even though the COVID-19 pandemic has been destructive to the global economy, especially for services sector operators, airlines and shipping firms, it has brought opportunities for rail freight companies such as goods and service providers for China-Europe freight train routes, Du said.

He added that China's steady economic recovery and its decision to build the new dual-circulation development paradigm, in which the domestic market is the mainstay and domestic and foreign markets complement each other, will create opportunities for the country's train manufacturers and related service contractors to remain competitive amid the raging pandemic worldwide.

Thanks to China's massive railway networks and fast-growing metro markets, the country's railway passenger and cargo transportation sector is still seeing steady growth thanks to high capacity and ecologically friendly practices, said Feng Hao, a researcher at the Institute of Comprehensive Transportation affiliated with the National Development and Reform Commission.

China aims to raise its global competitiveness in the railway sector by expanding its railway networks with wider coverage and higher speeds. It plans to have 200,000 km of track laid by the end of 2035, including about 70,000 km of high-speed track, according to the latest national railway plan, issued in August by China State Railway Group, the country's top railroad operator.

As China's fast-growing railway service networks, especially high-speed tracks, have significantly saved travel time, helped integrate regional economies, raised business efficiency and transformed the nation's economic map, many countries including Turkey, Indonesia and Malaysia have been keen to adopt such modes to develop their economies, said Yuan Bo, deputy director at the Institute of Asian Studies, affiliated with the Ministry of Commerce's Chinese Academy of International Trade and Economic Cooperation.

The maximum speed of China's current high-speed trains rose to 350 km/h when the Fuxing (Rejuvenation) high-speed trains began operating between Beijing and Shanghai in 2017. A maglev train with a designed speed of 600 km/h successfully completed a test run in June.