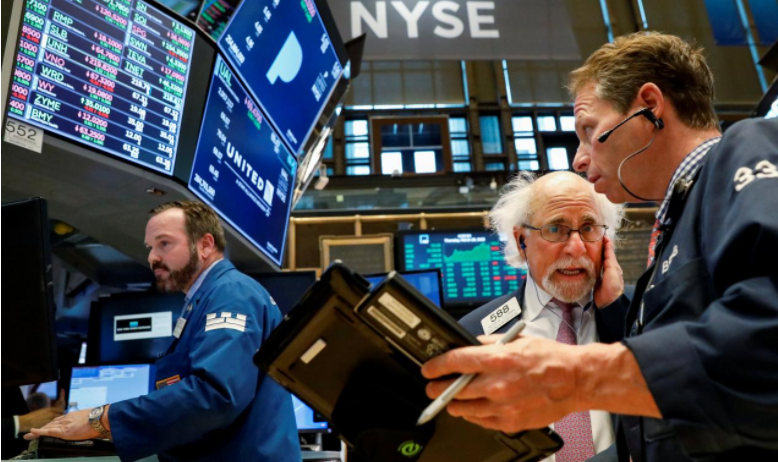 The rockiest US stock market in two years will meet a major test in the coming weeks as first-quarter earnings pour in, with expectations that tax cuts will help Corporate America show its biggest quarterly profit growth in seven years. Any disappointments could further upset the fragile market.

Hopes among stock investors are running high for corporate earnings season, which kicks off in earnest on Thursday and Friday with reports from several large financial institutions including BlackRock (BLK.N) and JP Morgan .

Investors have counted on corporate profits to provide bedrock support as the market endured sharp swings in recent weeks over concerns about a trade war with China and tougher regulations for high-flying technology companies.

The S&P 500 .SPX has recovered some after swooning more than 10 percent in February from its Jan. 26 record high, confirming a market correction for the first time in just over two years. The benchmark index remains more than 7 percent off its all-time peak.

“There is an awful lot of pressure for corporate profits in this first quarter and especially the guidance the companies are going to give to really get this market back on its upward track,” said Chuck Carlson, chief executive officer at Horizon Investment Services in Hammond, Indiana.

Analysts expect S&P 500 profits to rise 18.4 percent in the first quarter, according to Thomson Reuters I/B/E/S, the first full quarter since passage of President Donald Trump's tax cuts, which slashed the corporate tax rate to 21 percent from 35 percent. That would be the biggest profit rise since the first quarter of 2011.

Credit Suisse analysts calculated that more than one third of that growth in the first quarter can be attributed to tax benefits.

Given the tendency of companies to report results above Wall Street estimates, those numbers might be expected to come in even higher. For example, first-quarter profits should rise by 24 percent if results achieve the median out-performance of the past eight quarters, according to Thomson Reuters analyst David Aurelio.

“A downside risk is that everyone is hoping for the earnings to come through and that is really a main pillar for the bull case,” said Keith Lerner, chief market strategist with SunTrust Advisory Services in Atlanta. “And if earnings surprise to the downside then you have to say, what is the bull case hanging onto at this point?”

Expectations for first quarter profits have risen from an expectation of 12.2 percent growth on Jan. 1 to 18.4 percent now, an increase of 6.2 percentage points as analysts have factored in the new tax law.

That is unusual: In general, estimates decline by about 4 percentage points from the start of a quarter to the beginning of earnings season, according to Thomson Reuters data, which strategists say tends to help companies to post earnings “beats” when they ultimately report results.

“The expectation bar is a little bit higher this quarter because you didn’t see that cut ahead of time,” Lerner said.

The very early returns indicate first-quarter results show similar positive surprises to past quarters. Of 23 S&P 500 companies reported so far, 74 percent have reported profits ahead of estimates, according to Thomson Reuters data.

Seven more S&P 500 companies are expected to report next week including BlackRock, which is the world’s largest asset manager, and three big banks: JP Morgan, Citigroup (C.N) and Wells Fargo. More than 60 S&P 500 reports are due the following week.

One cushion for investors is that stocks are generally trading at less expensive valuations following the market’s slide. The S&P 500 recently traded at 16.3 times earnings estimates for the next 12 months, down from 18.6 times in January, according to Thomson Reuters Datastream.

S&P 500 companies are expected to increase profits by 19.7 percent in 2018, which would be the biggest annual rise since 2010. In their quarterly reports, corporate executives will give forecasts or insight into prospects for the year. Some strategists said recent policy and market turbulence could lead companies to temper their views.

“Given the uncertainty that is in the market, especially regarding trade and potential tech regulation, we could see management teams be a little more cautious,” said Lindsey Bell, investment strategist at CFRA Research in New York.