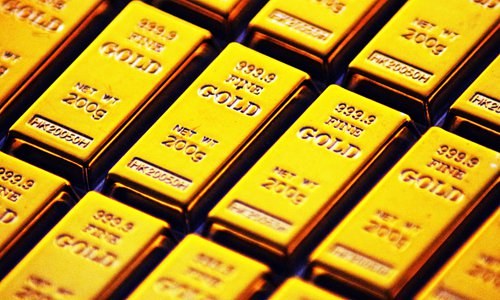 China's increase in its gold reserves in recent months aims to guarantee the safety, liquidity and value preservation and appreciation of its international reserves, an official said over the weekend.
Gold reserves have always been an important part of the diversification of global reserves for countries, said Wang Chunying, spokesperson of the State Administration of Foreign Exchange (SAFE).
Gold combines the multiple attributes of finance and commodities to help regulate and optimize the overall risk-return features of the international reserve portfolio, Wang said. "From a long-term and strategic perspective, we will dynamically adjust the allocation of global reserve portfolios as needed to ensure the safety, liquidity, value preservation and appreciation of international reserves."
China increased its gold reserves for the seventh month in June, taking its total reserves to 61.94 million ounces, up 330,000 ounces compared with the previous month, according to data from the Peoples' Bank of China (PBC), the central bank.
China's gold reserves were unchanged from October 2016 until December 2018, when the country began to increase its holdings, domestic financial news sitenews.stcn.com said.
If the country continues to purchase gold, China may surpass Russia in 2019 to become the world's largest gold buyer, the report forecast.
The SAFE recently released a report that gave information on such issues as the operational performance of China's foreign exchange reserves and currency structure.
The annual return rate of China's foreign exchange reserves stood at 3.68 percent from 2005 to 2014, SAFE data showed, and the current-account balance remained within a reasonable range, with a full-year surplus of $49.1 billion, accounting for 0.4 percent of GDP.
The stability of the current account is an objective reflection of domestic economic rebalancing and economic structure optimization, the SAFE said. The agency added that it is an inevitable stage of the transformation of China's economy, as well as a natural result of the increase in incomes and wealth of domestic residents.
As the largest holder of foreign exchange reserves in the world, China has been committed to enhancing the transparency of information regarding its foreign reserves, Wang said.
For instance, the PBC and SAFE have regularly disclosed the scale of foreign exchange reserves in accordance with the IMF's standards, Wang said, noting such efforts complied with China's demand to further expand its opening-up and were beneficial to boosting the global community's confidence in China's finance industry.
China's foreign exchange reserves increased to a 14-month high in US dollar terms as of the end of June, according to official data. Foreign exchange reserves rose for the second consecutive month to $3.1192 trillion in the month, up 0.6 percent month-on-month.
Despite uncertainties and mounting instability since the start of 2019, China's economy maintained stable growth and operated in a reasonable range. Supply and demand in the foreign exchange market is basically balanced, Wang said in June.