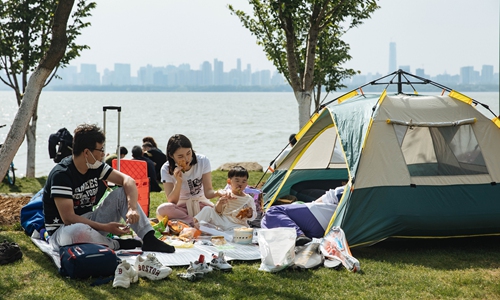 Wuhan residents enjoy camping and picnic in the spring breeze over the weekend at the city's Donghu Lake scenic area. Wuhan, capital of Central China's Hubei Province cleared all COVID-19 patients in hospital on Sunday, according to the National Health Commission.  (Photo: Global Times)

Even as the coronavirus begins to recede within China, hardest-hit city Wuhan's GDP in the first quarter plummeted 40.5 percent year-on-year, an unprecedented blow to the city's and Hubei Province's economies.

The GDP of Hubei Province fell 39.2 percent year-on-year in the first quarter, making it the most economically ravaged region in China.

The Tibet Autonomous Region was in February the first region in China to report zero confirmed COVID-19 cases and suspected cases.

The economies of Beijing, Shanghai and Guangdong Province fell between 6.6 and 6.7 percent, close to the national 6.8 percent contraction in the first quarter.

Cities along the coast in eastern China rely on export-oriented trade, hence they are feeling the pain as the coronavirus continues to rattle overseas countries.

In order to boost Hubei's economic recovery, a leadership meeting on supporting the economic and social development in Hubei was held on Wednesday, the Xinhua News Agency reported.

The meeting of the Standing Committee of the Political Bureau of the Communist Party of China Central Committee has discussed and endorsed a package of policies for supporting the  economic and social development in Hubei, specifying measures in fiscal, taxation, financial, credit, investment and foreign trade aspects, Xinhua said.