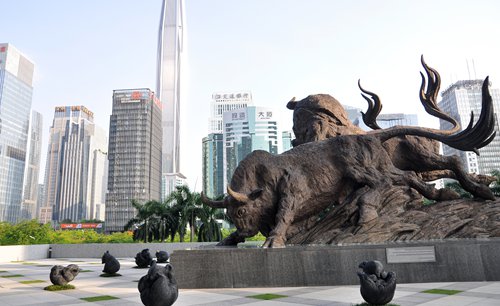 Statues outside the building of the Shenzhen Stock Exchange. (File photo: IC)

Violent unrest in Hong Kong that has seriously jeopardized the city's economic prospects has not shown any sign of spilling over to the Chinese mainland, which remains an attractive destination for overseas investment, despite suspected ill intentions by some in Hong Kong and beyond to undercut growth on the mainland.

Overseas investors in Hong Kong and other parts of the world continue to pour money into the mainland, even as the Chinese economy is battling rising external and domestic pressure, latest data showed. Some have expressed concern that chaos in Hong Kong, which is a major source and hub for investment into the mainland, could hit China's ability to attract overseas capital.

But analysts argued that the mainland will become even more attractive to foreign investors, as business conditions are set to improve through reform and opening-up measures and as other major economies, including in the US and Europe, are engulfed in their own economic and political chaos.

In the first seven months of the year, direct investment from Hong Kong into the mainland totaled $55.37 billion, slightly up from $54.75 billion a year earlier, according to data from the Ministry of Commerce (MOFCOM).

"As the Chinese economy continues to upgrade, foreign investors still have a huge interest in the mainland, particularly in some high-tech sectors," said Liu Xuezhi, an economist at the Bank of Communications.

In the January-July period, foreign investment in high-tech sectors was up 43.1 percent, while high-speed growth was also seen in areas such as aviation, electronics, telecoms and healthcare. Investment from major sources such as Germany and South Korea surged.

In another sign of unabated foreign interest, 490 of the Fortune 500 companies have invested in China, Qian Keming, vice minister of commerce, said on Wednesday.

Another indication of interest in the mainland is the increasing flow of overseas capital into the equity market through the stock connect programs between Hong Kong and the Shanghai and Shenzhen bourses.

"While there is also increased investment from the mainland into Hong Kong stocks, the trend is that more capital will flow into the mainland's A-share market," said Yang Delong, chief economist at Shenzhen-based First Seafront Fund Management Co.

Activity through the stock connects remained high in July even at the height of the violence and chaos in Hong Kong, with total turnover in the month rising nearly 10 percent from June to 355.9 billion yuan, according to the Hong Kong Stock Exchange.

"Whatever happens in the streets of Hong Kong will not affect economic activity in the mainland," said Cao Heping, a professor of the School of Economics at Peking University in Beijing, noting that the vast majority of investment will stay in the mainland because of the huge potential, though "some with ulterior motives want to bring chaos to the mainland, too."

Apart from the opportunities and improving conditions, the mainland offers much better options compared with "many other countries," including the US and Europe. "If you consider all the economic and political instability in those places, China is the best destination for many companies."