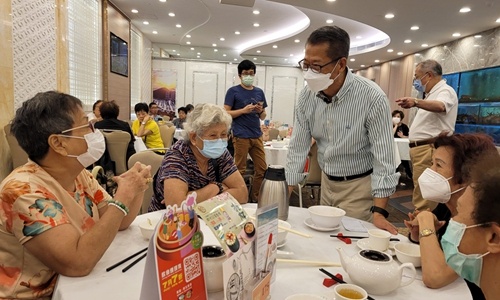 Over 6.1 million residents in the Hong Kong Special Administration Region (HKSAR) have joined the Consumption Voucher Scheme as of Saturday, according to HKSAR Financial Secretary Paul Chan Mo-po on Sunday.

Registration for the Consumption Voucher Scheme, which is aimed at bolstering consumption in the city to cope with the economic impact of the COVID-19 epidemic, began on July 4 and will conclude on August 14.

Residents, who registered and meet relevant criteria, will receive three consumption vouchers valued at HK$5,000 ($634.67) in total, which can be used in local retail, catering and service sectors to support local businesses, according to the HKSAR government.

In a blog post on Sunday, Chan said that more than 6.1 million of Hong Kong residents had signed up within two weeks, and 5 million of them will receive the first round of consumption vouchers value 2,000 $HK from August 1.

Chan noted that while there were some initial challenges to implement the program, but after hand-in-hand efforts to promote the program and address residents' concerns, the program has been steadily implemented to support the economy.

The HKSAR's economy expanded 7.9 percent in the first quarter of this year, ending six consecutive months of decline. Hong Kong's unemployment rate also dropped to around 6 percent on May from the 7.2 percent at the beginning of 2021, said Chan.