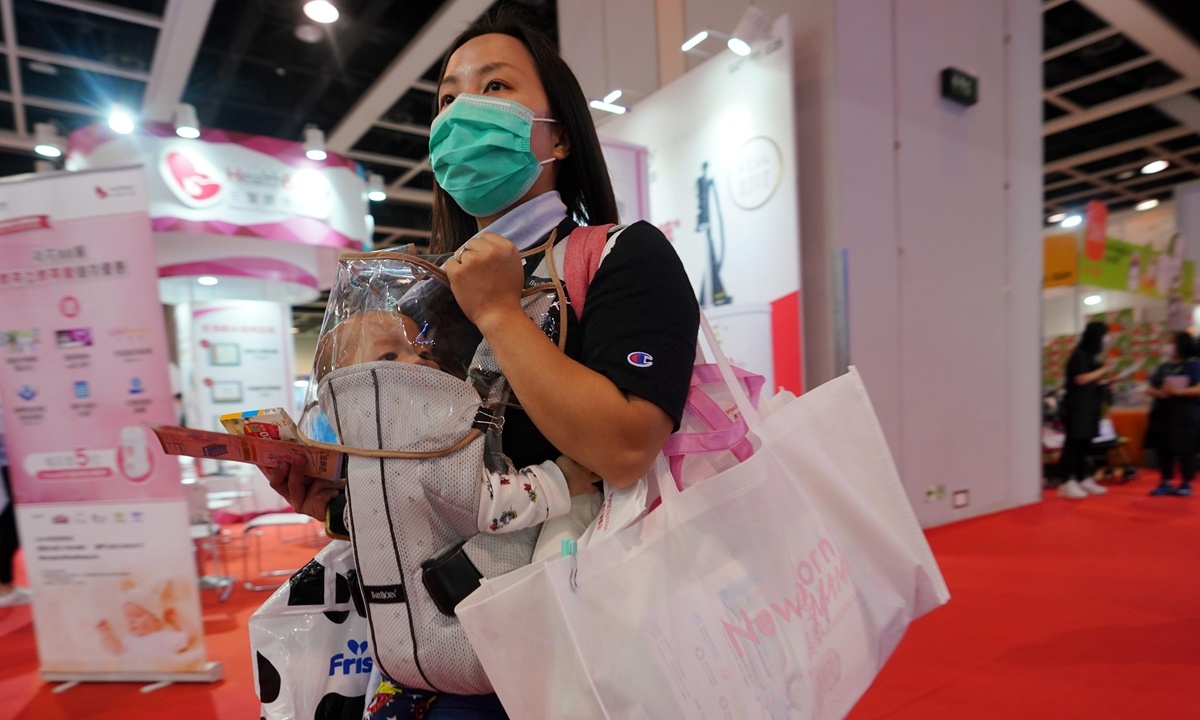 A mother takes full preventative measures against the coronavirus with her child when attending the 28th International Baby/Children Products Expo at the Hong Kong Convention and Exhibition Centre on Thursday, which is the first expo in Hong Kong after the Hong Kong government announced to reopen exhibitions on September 18. Photo: VCG

The continuous recovery of the Chinese mainland economy will help revitalize the Hong Kong economy, which has been in contraction for four consecutive quarters, said Paul Chan Mo-po, the finance secretary of The Hong Kong Special Administrative Region (HKSAR) on Sunday.

In a blog posting, Chan predicted that Hong Kong's third quarter's GDP would significantly improve compared with the second quarter which saw the economy contract a massive 9 percent year-on-year.

The momentum for the mainland's economic recovery and the gradual improvement in Hong Kong's consumption as the local endemic shows signs of being brought under control should ease the pressure of economic contraction in Hong Kong, he wrote.

He noted that in the past 10 years, the Chinese mainland has been Hong Kong's largest export destination and source of goods, accounting for 54 percent of Hong Kong's merchandise exports and 47 percent of imports.

In this context, Chan believes there is a good chance that Hong Kong's foreign trade performance will improve accordingly, after the mainland recorded an impressive 4.9 percent GDP growth in the third quarter.

Chan predicted the export figures would continue to improve in September.

Hong Kong's exports have recorded negative growth for six consecutive quarters, but the decline has narrowed from 7.4 percent in May to 2.3 percent in August.

In terms of consumption, Chan believes private consumption has improved in September as social distancing measures were relaxed.

Private consumption in Hong Kong has plunged for four consecutive quarters. The decline has widened to about 14.2 percent in the second quarter compared with a 3 percent drop in the second half of last year.

Chan noted that Hong Kong's economy can rebound back on track if it can restore the smooth flow of personnel and business activities with the mainland and seize the opportunity of the mainland's "duel circulation" policy which will significantly rely on the domestic cycle of production, innovation, distribution, and consumption.